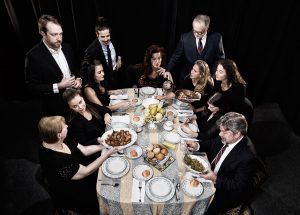 Mix in Violet, the drugged-up, scathingly acidic matriarch, and you’ve got a story that unflinchingly—and uproariously—exposes the dark side of the Midwestern American family.

Said the New York Times of the play, “I’d bet the farm that no family has ever been as unhappy in as many ways—and to such sensationally entertaining effect—as the Westons of AUGUST: OSAGE COUNTY, a fraught, densely plotted saga of an Oklahoma clan in a state of near-apocalyptic meltdown. Fiercely funny and bitingly sad…[a] turbo-charged tragicomedy.”

The play won five Broadway Tony Awards, including Best Play, Best Actress, and Best Featured Actress, which tells the story of how magnificently the roles are written.

Says guest director Suzanne Smartt, “Violet Weston is right up there and has been counted as one of the greatest roles ever written – being compared to King Lear for range, scope, and savagery of character.  In that scope, Violet Weston is a bellowing Lear equivalent, rampaging over the family, presiding over dark secrets, terrorizing all as she blasts her way through lives and the dear hearts of those who try to love her.”

Rodney Strong and Sadie Collins are the stage managers.

Note that the show has extremely mature language and mature situations appropriate for mature audiences only. Audience discretion is advised.

For director Suzanne Smartt’s insights about the play, CLICK HERE.