The Hills Are Alive with “The Sound of Music” Sept. 30 through Oct. 16 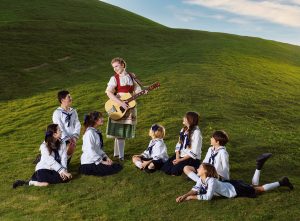 The musical that sings the praises of “raindrops on roses and whiskers on kittens” surely ranks among “My Favorite Things” for many of us, which is why the Chattanooga Theatre Centre is thrilled to open its 2022-2023 season with perhaps the world’s most beloved musical, THE SOUND OF MUSIC.

The show kicks off the CTC’s 99th season on Friday, September 30, and runs for 13 performances through Sunday, October 16.

The inspirational story, set in 1938 Austria and based on the memoir of Maria Augusta Trapp, follows an exuberant postulant nun-in-training who serves as governess to the seven children of the imperious Captain Von Trapp, bringing music and joy to the household. But as the Nazis take hold of the country, Maria and the Von Trapp family face danger and intrigue.

The final collaboration between the celebrated Rodgers & Hammerstein, THE SOUND OF MUSIC opened on Broadway in 1959 and was a triumph. It ran for 1,443 performances and earned five Tony Awards, including Best Musical. It went on to be adapted as a motion picture, released in 1965, and won five Academy Awards.

The stage musical features a trove of cherished songs well known from the movie, including “My Favorite Things,” “Climb Ev’ry Mountain,” “Do Re Mi,” “Sixteen Going on Seventeen,” and the title number. But theatre audiences will enjoy three songs that were in the Broadway musical but not the film, including “An Ordinary Couple,” sung by Maria and the Captain, “How Can Love Survive,” sung by Max and Elsa, and “No Way to Stop It,” sung by Max, Elsa, and the Captain.

Another notable difference is that while the film focuses primarily on the relationship between Maria and the Von Trapp family, the stage musical dives deeper into the historical setting, much of which has become relevant today.

Directed by Scott Dunlap with music direction by Gordon Inman, the CTC production features Addie Counts in the role of Maria and Jeremy Campbell as Captain Von Trapp. The Von Trapp children are portrayed by Georgia Sharp as Liesel, as well as Naomi Elliot as Gretl, Piper Elliot as Marta, Emerson Giles as Kurt, Josie Julienne as Louisa, Catarina Lopez de Sousa as Brigitta, and Roman Medina as Frederich.

Performances are Fridays and Saturdays at 8 p.m., Sundays at 2:30 p.m., and Thursdays at 7 p.m. Two additional matinees are scheduled on Saturday, October 8 and October 15 at 2:30 p.m.