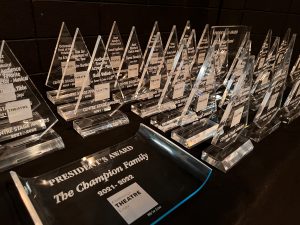 Volunteers contributing to nine exciting shows that made it to the stage as the Chattanooga Theatre Centre rebounded from the pandemic with the 2021-2022 season won honors at the Centre Stage Awards on Saturday, September 3.

The annual awards salute the valued volunteers on stage and off who have contributed their time and talent to the success of the theatre’s past season. The adults were joined by volunteers from the Youth Theatre, many of whom were recognized with Sonia Young Honors for Excellence.

Top awards went to the Champion family as winners of the President’s Award, which recognized the contributions of a beloved member of the CTC family, Vena Champion, who passed away this summer, and her sons, Drew and Alex. Box office assistant and volunteer Kitty Murakami was the recipient of the Producer’s Award, and Claire Bartlett, founder of the CTC Book Club, was the Dan Jay Volunteer of the Year.

Here’s the list of other honorees for each production:

BAREFOOT IN THE PARK (September/October 2021):