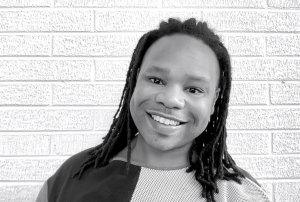 Inspired by his love of fairytales and music, combined with his own life experiences, led composer and lyricist Michael Dexter to write the music and lyrics for what became GIANT STEPS: AN URBEAN MUSICAL, which will make its world premiere at the Chattanooga Theatre Centre on July 22.  Blending music ranging from gospel to calypso, the show is a contemporary twist of the classic fairytale Jack and the Beanstalk.

Growing up in Chattanooga, Michael found music helped him to cope with tough times. Following a confrontation with a middle school bully in music class, his teacher found him angrily playing the piano.

“She must have seen something in me and offered to give me free piano lessons,” said Michael. After hearing about some of his friends’ participation in the performing arts program at Chattanooga Center for Creative Arts, he auditioned for musical theater and was accepted into the program.

He quickly caught the theatre bug when he and a friend saw SMOKEY JOE’S CAFE at the Tivoli.

“I saw people like myself having the time of their life on stage and I thought I can do that,” he said. “So, I went back to school and told my teacher to teach me everything there is to know about musical theatre, because I knew this was what I wanted to do for the rest of my life.”

Then CCA musical theatre teacher Allan Ledford had given them the tickets to the show and later that spring took the musical theatre students on a trip to New York City.

“It was 1998 and I was 14 years old,” Michael said. “We saw the original cast of THE LION KING perform on Broadway and it was amazing. Everyone was enthralled by the male lead. And I thought there are not many African American fairytales written that could be adapted into musicals. Other than THE PRINCESS AND THE FROG, I can’t think of many. So, I wanted to contribute a piece that would expand those tales into the African American community with a male lead.”

The seed for GIANT STEPS was planted in his mind from this high school trip and began to grow. “I’ve always loved fairytales and been interested in mythology,” Michael said. “I loved the fairytale of Jack and the Beanstalk. I love the magical bean element and that Jack was poor and that his mother was a poor widow. I love that the beanstalk goes up into the clouds into another world where a fantastical story is told.”

Michael began writing music with this idea in his mind.

After graduating high school, he earned a Bachelor of Music in Musical Theater from the University of Miami Frost School of Music. He got an agent following a musical theatre senior showcase in New York. Michael booked his first professional show performing in FINDING NEMO: THE MUSICAL at Disney World.

“The creative team was remarkable and the experience was great. During that show, I auditioned for the Off Broadway show WANDA’S WORLD and that’s what got me back to New York,” he said.

One day during a rehearsal, the show’s writer, Eric H. Weinberger, heard Michael playing some of the music he’d been writing on the piano. After hearing Michael’s show idea, Eric asked could he write the book for it.

“I thought this was one hundred percent from God and that’s when my life changed,” Michael said.

With Eric writing the story and Michael bringing his music composition and lyrics into it, the show began to take shape. Soon after, Michael got involved with the BMI-Lehman Engle Musical Theater Workshop. He said, “From that program, I was able to workshop the music and songs with Eric.”

In 2012, some Texas musical theater friends of Eric’s were visiting in New York and were invited to see the second reading presentation of GIANT STEPS. They quickly invited them to bring it to the Texas Musical Theatre Workshop at the University of Texas in Austin. Michael had a friend who knew Broadway actor Billy Porter and suggested he invite him to direct the presentation.

Billy would later go on to star as Lola in the Broadway production of KINKY BOOTS but had time to accept Michael’s invitation. “It was incredible to work with Billy Porter. The whole process was absolutely incredible. We worked with the university musical theater students and while there gave them master classes,” said Michael.

During this time, he worked as a choir director and music teacher at local churches and schools including East Lake Academy of Fine Arts and Ooltewah Middle School. He currently is in his third year of teaching theatre and piano at Chattanooga Preparatory School.

Michael said, “When I first moved back, I was depressed and needed to audition and did for LES MISERABLES at CTC. I thought this would be a good way to fuel my spirit.” He won the lead role of Jean Valjean. This was also where he first met now CTC Executive Director Rodney Van Valkenburg, who was cast as Thenardier in the show. When Rodney was getting ready to direct CTC’s 2021 season production of WORKING: A MUSICAL, he asked Michael to provide the music direction and Michael’s husband, Louie Marin-Howard, to choreograph the show.

Rodney said soon after he took the job of Executive Director at CTC, Michael approached him with GIANT STEPS, and he was excited to debut this original work on the CTC stage.

“The attraction for CTC was Michael being a local person and the fact that it had been workshopped in New York and in Austin,” Rodney said. “I knew Michael and his professionalism in music and theatre from working with him in LES MISERABLES. Since CTC is a community theatre and he is from this community, that was the appeal and attraction to have his show debut here.”

Rodney said, “I am more of a consultant than assistant director, providing extra eyes and support. Since this is an original work, there is no blueprint. It’s all new.” He said it is a challenging piece. “Michael is an excellent composer and the harmonies in the music are really tight with vocal ranges high and low. It has been a really thoughtful process to enlist a creative team to put this together.”

Rodney continued, “For the theatre, it is just a rare treat for the composer of the show to be present and a part of the process and to hear the stories behind the inspiration for the music. In one scene, the main character sings about having his bicycle stolen. This actually happened to Michael and inspired him to write that song. And to hear him talk about how he was influenced by the music of Michael Jackson.”

“We loved actress Alyssa Watts’s singing voice, but her character, Belle, in the show didn’t have a solo to sing. So, Michael wrote a new song for Belle to sing. That’s the rare and great thing about having the composer on set. Not only is this a world premiere for this show, but it will be the first time this song will be heard,” said Rodney.

Though Michael is excited and happy to see GIANT STEPS make its world premiere at CTC, he said, “It is also bittersweet. Eric passed away in 2016. I took a pause for a while to mourn. He not only wrote the book for the show, he was my mentor. Now I feel like he’s my guardian angel and he’s still with me. I promised him that I would move forward with the show and take it all the way. And I mean all the way from CTC to Broadway.”

GIANT STEPS opens on the CTC mainstage Friday, July 22 and runs through Sunday, August 7. For tickets, call the box office at 423.267.8534 or order online at TheatreCentre.com.