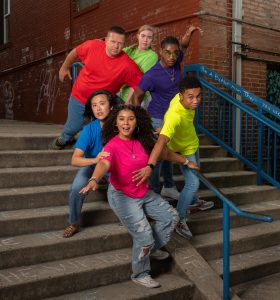 The classic fairytale Jack and the Beanstalk gets a contemporary interpretation in the inner city of a major American metropolis as a brand new work, GIANT STEPS: AN UrBEAN MUSICAL, makes its world premiere on the Chattanooga Theatre Centre stage July 22 through August 7.

With music ranging from gospel to calypso, GIANT STEPS features music and lyrics by Chattanoogan Michael Dexter, a local theatre and music teacher who has performed Off-Broadway.

With a book by Drama Desk nominee Eric Weinberger, GIANT STEPS follows the story of Jermaine “J” Johnson, a 15-year-old boy who lives with his widowed mother in a miserable tenement basement apartment.

J escapes the dreariness of his reality through comic books and fantasizes about becoming a superhero. A chance encounter with a street vendor leaves J with magical beans that will forever change his fate.

GIANT STEPS first got on its feet in a workshop production at the University of Texas at Austin. That production was directed by Broadway star Billy Porter, who took an early interest in Dexter’s musical.

Dexter began his relationship with the Theatre Centre in 2014, when he performed the role of Jean Valjean in LES MISERABLES. More recently, he served as music director of WORKING: A MUSICAL in August 2021.

In between those stints, he worked in New York City, where he performed Off-Broadway in WANDA’S WORLD. A graduate of the Center for Creative Arts with a master’s in education from the University of Tennessee at Chattanooga, he is a theatre and piano teacher at Chattanooga Preparatory School.

(Appropriate for ages 10 and up)