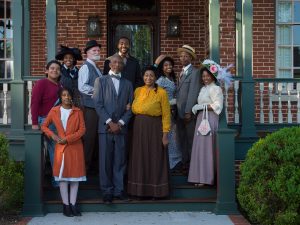 The setting is a 1911 Pittsburg boarding house, but the spiritual location is a crossroads between the past and the future, slavery and freedom, despair and hope, as the Chattanooga Theatre Centre presents August Wilson’s JOE TURNER’S COME & GONE June 10-26.

The winner of the New York Drama Critics Circle Award for Best Play, JOE TURNER’S COME & GONE is the second of Pulitzer Prize-winner August Wilson’s 10 American Century Cycle plays depicting the African American experience in the 20th century. They include FENCES and GEM OF THE OCEAN, which the CTC staged in 2019 and 2020.

JOE TURNER’S COME & GONE is set during the Great Migration of the 1910s, when descendants of slaves moved in large numbers from the South toward the industrial cities of the North, seeking new jobs, new lives, and new beginnings.

When Herald Loomis arrives at a black Pittsburgh boarding house after seven years’ impressed labor on Joe Turner’s chain gang, he is a free man-in body. But the scars of his enslavement and a sense of inescapable alienation oppress his spirit, and the seemingly hospitable rooming house seethes with tension and distrust in the presence of this tormented stranger.

Loomis is looking for the wife he left behind, believing that she can help him reclaim his old identity. But through his encounters with the other residents, he finds his way to recovering his lost spirit and discovering a new life.

Other characters include Seth and Bertha Holly, owners of the boarding house, who create a makeshift family of transients; a “conjure” man, Bynum, who encourages the others to “find their songs”; Rutherford Selig, a peddler and “people finder” who descended from slave traders; and Mattie, Molly and Jeremy, a trio of 20-somethings whose varied journeys converge at the boarding house.

Haymer, a Nashville native, has been a part of that city’s arts scene for over 20 years, performing at just about every professional and community theatre. She has also directed with Actor’s Bridge Ensemble, Street Theatre Company, Nashville Story Garden, Kindling Arts Festival, and Nashville Repertory Theatre. She is also a mentor for the Young Voices Competition, a monologue competition using the work of contemporary Black writers.