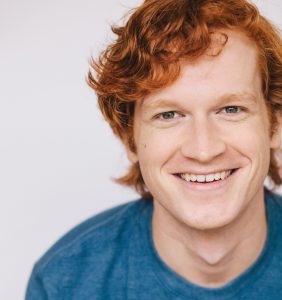 Michael has been performing without a script, with dozens of improv groups all over the country, since 2012. In addition to The Second City, he trained at Upright Citizens Brigade and The Groundlings, both in Los Angeles, among others. He is a founding member of the award-winning musical improv group “Rogers and Hammertime.”

Outside of improv he has been seen performing on stage in the national tour of The Music Man, the television show The Price Is Right, Busch Gardens Williamsburg, and the Los Angeles standup comedy circuit. He recently relocated to Chattanooga with his wife, Mollie, and is excited to share his passion for improv comedy at the Chattanooga Theatre Centre.

What sparked your interest in improv?

As a child I loved a TV show called Whose Line Is It Anyway, famous for its tagline “where everything’s made up and the points don’t matter.” I would laugh myself to tears at these brilliant comedians inventing skits and characters on the spot and I loved how it was even funnier when they messed up.

I love the creativity and spontaneity that it allows. There are no scripts, costumes, or rules so you might be in jeans but your character is an astronaut, a lobster, or a police car from the set of NCIS: New Orleans. You won’t know until you’re already on stage!

What are the essentials of a good improv performance?

If people are laughing, keep going!

What sort of mindset should aspiring improv actors have?

What do you hope students get out of your class?

My goal is to give everyone the tools to get on stage and come up with something funny from nothing. Some will learn to control their natural comedy instincts and some will learn to push themselves to a place they didn’t know possible. Who knows, we may find the next Tina Fey or Wayne Brady!

Imagine you’re standing on a stage and an entire audience is expecting you to perform a scene. It needs to have a beginning, middle, and end. It has to make them laugh. And it has to happen right now. Here’s the catch. The scene hasn’t been written yet. You don’t have any direction, or lines memorized, you don’t know the name of your character, or even what the scene is going to be about. You have absolutely no idea what you’re about to do. And THEY KNOW that you have no idea what you’re about to do! But they still expect you to do it for them! That is the adrenaline rush you get with improv and this class will take that moment from scary to exciting.

Also, improv is useful off stage too! These tools translate better to real life than any art form. You will become more confident and better at listening and communicating. This in turn will give you a boost in the classroom and the boardroom!