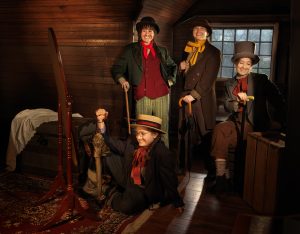 A story that was groundbreaking in its portrayal of strong women in Louisa May Alcott’s 1868 novel is infused with heart and energy in the Broadway musical adaptation of LITTLE WOMEN, coming to the Chattanooga Theatre Centre stage March 18 through April 3.

The musical, which played on Broadway in 2005, is based on Alcott’s semi-autobiographical story of the four March sisters—traditional Meg, free-thinking Jo, timid Beth and romantic Amy—and their beloved Marmee, at home in Concord, Massachusetts, while their father is away serving as a Union Army chaplain during the Civil War.

Jo, an aspiring writer, is trying to sell her stories for publication, but publishers are not interested. Her friend, Professor Bhaer, tells her that she has to write more from herself. Begrudgingly taking his advice, Jo weaves the story of her sisters and their experience growing up in Civil War America.

Intercut with the vignettes in which their lives unfold are several recreations of the melodramatic short stories Jo writes in her attic studio. This ageless, captivating story—both a product of its time and very of the moment—is brought to life in a high-energy musical filled with humor, hope, heartache, and personal discovery.

The CTC is putting its own spin on the show, casting young actresses alongside older ones to portray the sisters at earlier stages of their lives.

The play will be presented in the Mainstage Theatre, where capacity will be limited to 75 percent. Seating is socially distanced, and face masks are recommended and appreciated. Proof of vaccination or a recent negative COVID test is no longer required.