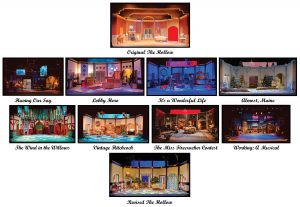 As most of the live entertainment world came to a standstill in the middle of March 2020 due to the coronavirus pandemic, so did the Chattanooga Theatre Centre briefly for the first time in its history of 98 years on the day it was set to open its production of Agatha Christie’s The Hollow on the Mainstage. Only briefly, thanks to CTC Director of Productions Scott Dunlap.

Though the CTC lost half of its staff during this time, Scott came up with an idea to resume productions quickly. It’s a story of 11 shows and one set.

“By June, as Rodney Van Valkenburg had just filled the position of CTC Executive Director, we started talking about what we could do to have something to present,” said Scott. “The decision was made that we would not go dark until this thing passes, because there seemed to be no end in sight.”

In the CTC’s Circle Theatre sat the set of Barefoot in the Park, which had been scheduled to open soon after The Hollow, both plays which he said were “chosen and created in a different world where Covid wasn’t an issue. There was kissing, people up close and fighting.”

“We didn’t feel like we could do those plays justice by trimming them or editing them to keep actors safe. Right away, we ruled out the Circle because of the intimacy of it. It was too close to keep everyone six feet apart to stay safe,” said Scott.

But the Mainstage was large enough to maintain social distance on stage and between parties in the audience. After The Hollow closed within hours of opening, the CTC wanted to maintain the set in hopes of presenting that show when it could. Scott recalled, “We didn’t want to take The Hollow set down, because we had made a promise to see that through.”

Scott came up with the solution to use the same set, modifying it for each subsequent production, to give the audience a fresh stage for each show, explained Rodney.

After combing through hundreds of plays that could be performed on the set using a small cast while observing Covid safety protocols, they chose Having Our Say for the first production.

Scott also suggested the precaution of double-casting each show, saying, “From my years of directing Youth Theatre, if one kid gets sick, you have a replacement. But with Covid, if one person in one cast tests positive, the whole cast has to be out. So, we had to have a backup plan with a second cast.”

Having Our Say had a cast of two women and required the first set redesign. Scott said, “It was the easiest transition. We kept most of the set the same, except for some decorations and moving some off-stage spaces around to create more depth and create the living room of those ladies.”

Along with Having Our Say, Lobby Hero and It’s a Wonderful Life: A Radio Play were chosen to be the first shows to use the same set. Scott said, “With each show, we just kept holding out hope that we would get back to do The Hollow. But with each play, we got further out from what our original intent was, so we took bigger chances with each one. We started changing the set color, painting the floor differently and really mixing it up.”

Though the original set presented some challenges with some of its angles and the opening locations, once he determined how the show would fit, he would draw a sketch of how to adapt it. Scott’s years of directing Youth Theatre, operating on a small budget his first year, had prepared him for this challenge.

Early on, he had learned and later mastered how to be resourceful. “I would see elements in a set and try to find a way to reuse them in a Youth Theatre set, because it would save money,” he said.

From Having Our Say to Lobby Hero was a significant change with more paint treatment and embellishments, but these choices were also deliberate to make the next switch easier. “We were always thinking of three shows at a time and how this is going to evolve from step to step. Once Lobby Hero opened, I began sketching the It’s a Wonderful Life set,” said Scott.

Each time he started to sketch the next set, he said he would “make choices knowing that certain things about the set would not change.” Though the walls got a complete color change, the floor was painted in a way that would be used again for The Wind in the Willows.

“Instead of a complete 180-degree change for the next show, it was more like a 45-degree change each time,” he said. In spite of these sometimes incremental changes, Scott managed to magically transform each set making them unrecognizable from the previous one. Even actors returning to see a new show said they had trouble distinguishing what parts had been their set.

As the next three plays were chosen, Scott continued this process to realize the ideas for each one. CTC Marketing Director Julie Van Valkenburg chose to display the set renderings in the Mainstage lobby, to show these amazing transformations.

“It saved us,” Rodney says. “What we don’t have during this pandemic is time and money. We have half the staff and not the normal number of volunteers in an effort to reduce Covid numbers. There were only two to three weeks to make the shift from one set to another, when it usually takes five to six weeks. There would have been no way we could have started with a new set from the ground up due to the lack of money and labor shortage.”

The show that proved to be the most challenging to redesign was Working, which was the only musical during the season. Scott said because The Hollow set was designed for a murder mystery, one of the ways in which the set designer chose to create tension was to have the entrances and exits out of balance. He explained that the set has four entrances from the center to stage left and only one entrance on stage right, which is unusual and problematic for a musical.

“It makes it difficult visually to find balance on the stage when a musical you want half of the actors to come from one side and half from the other side. We added entrances downstage a bit to give more balance to the stage right side,” Scott said.

“The Miss Firecracker Contest was my favorite,” said Scott. “The way that everything worked. There was a swinging door that went into the kitchen, and because of the way the play was written, the actors are supposed to be able to come into the kitchen from the dining room. And I created a similar space in the hallway and an entrance, altogether making a figure eight. As a director, it was a lot of fun to block the actors through that and it was a really beautiful set,” he said.

Scott added, “All of the shows were really beautiful and I’m really proud of each one, because they’re all different. They all have the same bones, but they each have a different personality. It’s like costuming people to make them look like different characters.”

Throughout this journey, Scott had some valuable assistance. “With Annie Collins, who has been helping, we worked and painted this set so much, that we began to know what the problem areas were. We learned to communicate non-verbally about what needs to happen to the space and how to proceed with the work, which was kind of fun,” he said.

“As we moved forward and added Jesse Headrick to our crew, it’s been nice to have some fresh eyes to give perspective on it. He worked on how to create a cleaner, safer space both on stage and back stage, which helped in cleaning, caring and maintaining the set,” said Scott.  “Without the help of Annie, Jesse and Justin, before Jessie, none of this would have happened.”

Scott not only designed and transformed the same set for each show, but also worked on costuming, painting, pulling props, and designing new lights, which Alex Miller-Long came in and installed.

Though there were moments when he felt he was losing steam, now that The Hollow has opened and will soon close and the set will be removed, he says, “It’s a little bittersweet. Part of me would like to get one more show out of it.”

Though the set was originally built for The Hollow, The Lion, the Witch and the Wardrobe used it first before the pandemic began, then Scott seamlessly saved it for Having Our Say, Lobby Hero, It’s a Wonderful Life: A Radio Play, Almost Maine, The Wind in the Willows, Vintage Hitchcock: A Radio Play, The Miss Firecracker Contest, Working and now finally The Hollow.

He said, “I’m proud of what we did, but I’m also excited to take it down and start fresh. We really made lemonade out of the lemons we had last year.”

Rodney said many community theatres around the country that continued to operate through Covid either used very minimal sets or chose to do shows via live stream or on Zoom. The CTC was not comfortable with the streaming option, he said.

“It was important for us to find a way to do live performances safely and well,” Rodney concluded. “I’m very proud we were able to produce shows during Covid, without sacrificing quality. We’ve maintained our standards. We wouldn’t have had such a successful season without Scott’s creativity and ingenuity.” 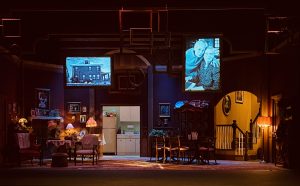 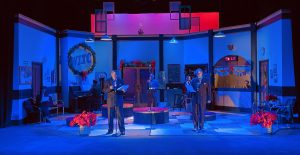 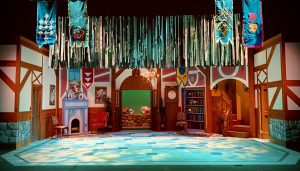 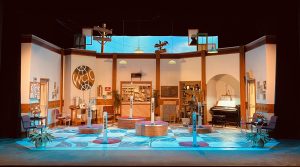 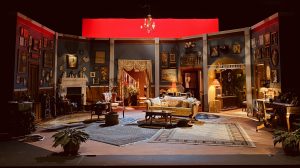 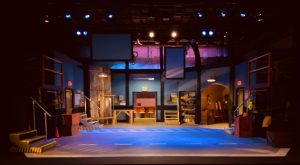 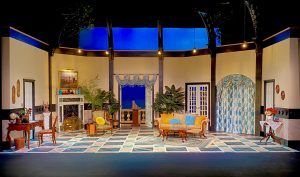