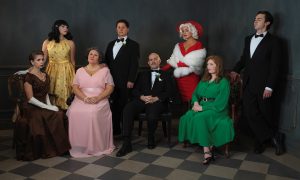 No one does it like Agatha Christie, the unquestionable queen of the murder mystery, and the Chattanooga Theatre Centre’s upcoming production of THE HOLLOW will place audiences smack in the middle of one of her most cleverly crafted thrillers. The show opens Friday, October 22, and runs through Sunday, November 7.

Christie is the best-selling novelist of all time. In the 1930s, she began adapting her stories for the stage and became a record-breaking playwright. The London production of THE MOUSETRAP is the longest continuously running play in history, now in its 69th year. THE HOLLOW is based on her 1946 book of the same name and was first produced on stage in 1951.

The CTC’s production, originally set to open in March 2020, was sidelined within hours of opening by the start of the pandemic. It finally returns to the stage with much of the original cast.

Visiting are several cousins from different sides of the Angkatell family. Reserved Edward, the rich owner of the family estate where they frolicked in their youth, is in love with Henrietta, a cool and confident sculptor whose affections lie elsewhere. Midge, a less affluent and often overlooked cousin who has to work for a living, doesn’t even see the point of confessing her love for Edward.

Increasing the tension are Dr. Cristow, a successful but somewhat misanthropic doctor, and his socially awkward wife Gerda, who everyone thinks of as dimwitted. A new neighbor turns out to be a glamorous movie star, Veronica, who has a history with John.

It is the charming Inspector Colquhoun and his down-to-earth assistant Sergeant Penny who must try to follow Christie’s well-crafted twists and turns to unmask the killer. Also hanging around in case we need any more suspects are the officious butler Gudgeon and housemaid Doris.

The critical reception of THE HOLLOW, while readily branding it a crowd-pleaser, suggests it is particularly rich in character development. Eccentric Lady Angkatell is arguably Christie’s finest comic grande dame.

The cast of 12 veterans and newcomers to the CTC stage is under the helm of guest director Bob Willie. They are Annie Collins, John Echols, Jeff Fowers, Kelseigh Garrett, Joanna Lewis, Deb Meeks, Haylee Meyer, Will Park, Dana Rogers, Jason Russell, Christian Smith, and Lindsey Wills. Jay Echols is the stage manager, and Brittany Rogers is the assistant stage manager.

The play will be presented in the Mainstage Theatre, where capacity will be limited to 40 percent. Seating is socially distanced and face masks are required. Audience members must present proof of vaccination or a negative COVID test within the last 72 hours at the time of arrival. This policy will be continually evaluated.