Love Is in the Air & Laughs Are in the Forecast as CTC Presents “Barefoot in the Park” Sept. 24-Oct. 10 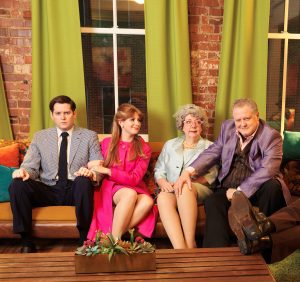 There’s nothing quite like the exhilaration of young love, new marriage, and your very own apartment five flights up in 1960’s New York City. After a breezy honeymoon, a pair of passionate young newlyweds settles down to some rocky happily-ever-aftering in the Chattanooga Theatre Centre’s upcoming production of Neil Simon’s romantic comedy BAREFOOT IN THE PARK.

The show, which is finally making it to the stage after being sidelined by the pandemic in March 2020, opens Friday, September 24, and runs through Sunday, October 10.

Simon’s second Broadway hit, BAREFOOT IN THE PARK opened in 1963 and ran for 1,530 performances, winning a Tony Award for director Mike Nichols. Heartfelt and hilarious, the play firmly established Simon as a master of comedy with his sharp wit, firm structure, and vivid characterizations of middle-class urban dwellers.

In 1967, BAREFOOT was adapted for the big screen, starring Jane Fonda and Robert Redford. It saw a successful Broadway revival in 2006. Simon died in 2018 with a well-earned reputation as America’s most commercially successful playwright.

The comedy follows a free-spirited bride and her buttoned-down groom who clearly demonstrate that opposites attract. Paul is a serious young lawyer and Corie is an impulsive young housewife. After a six-day honeymoon at the Plaza Hotel, they settle down in a sparse apartment on the top floor of a New York City brownstone. (The exhausting stairs to the fifth-floor walkup are a running joke in the play.)

Corie thinks their tiny apartment is perfect, but with bad plumbing, a closet for a bedroom, a leak in the skylight, and an unexpected rooftop neighbor, anything that can go wrong invariably does.

When they get a surprise visit from Corie’s loopy mother, Corie decides to play matchmaker during a dinner with the eccentric neighbor, a scheme which Paul thinks is doomed from the start.

In the process, the newlyweds discover that marriage is no walk in the park. Corie wants Paul to be a little more spontaneous, and running “barefoot in the park” would be a start.

The Theatre Centre production, which was within two weeks of opening when it was put on hold 18 months ago, returns with most of its cast intact. It features CTC newcomer Erin Skelley Holderman as Corie and CTC veteran Jeremy Campbell as Paul. Julie Van Valkenburg portrays the well-meaning mother, and James Lawson is the colorful neighbor in the attic. Chris Williamson reprises a role he memorably played at the CTC in 1999 as a telephone installer.

Scott Dunlap is the director, and Angie Griffin is the stage manager.

The play will be presented in the Circle Theatre, where capacity will be limited to 40%. Seating is socially distanced and face masks are required. Audience members must present proof of vaccination or proof of a negative COVID test within the last 72 hours at the time of arrival.