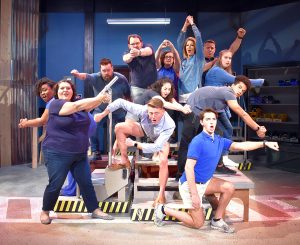 Among the lessons we’ve learned in the past year is how much we depend on essential workers. The schoolteacher. The waitress. The elder care worker. The trucker. That newfound appreciation for those whose jobs are often taken for granted makes the Chattanooga Theatre Centre’s next production especially timely.

The CTC will present WORKING: A MUSICAL, a musical exploration of what makes our work meaningful across all walks of life, from Friday, August 20, through Sunday, September 5.

Adapted from Studs Terkel’s best-selling book of interviews with American workers and featuring songs by Lin-Manuel Miranda (HAMILTON), Stephen Schwartz (WICKED), and Grammy winner James Taylor, WORKING is a musical that reminds us to celebrate not only what we do, but how we do it.

The musical is built around a series of monologues, based on Terkel’s insightful portraits that gave voice to white- and blue-collar workers when it was published in 1974. His work inspired the musical, which went on to an Off-Broadway run and earned six Tony Award nominations.

The show gained new momentum when it was rewritten in the 1990’s and again in 2012. Some songs have been dropped over the years as professions grew obsolete (Schwartz’s newsboys number, for example), while new features have been added to update the work, notably two songs by the Tony Award-winning Miranda.

The musical paints portraits of working stiffs like ironworkers, millworkers, and stone masons but also white-collar workers like hedge fund managers, flight attendants, and publicists. From the most belittled of professions—the housewife—to the most tawdry of professions—the prostitute, WORKING shares the extraordinary dreams of the most ordinary of people.

In the end, the common thread is the need to find dignity in even the most seemingly mundane employment and the reward of taking pride in one’s work, no matter how humble.

The play will be presented in the mainstage theatre, where in keeping with safety protocols capacity will be limited to 40 percent and ushers will seat patrons with several vacant seats between parties. Face masks are required. To see the CTC’s complete safety protocols, visit TheatreCentre.com/Safety.