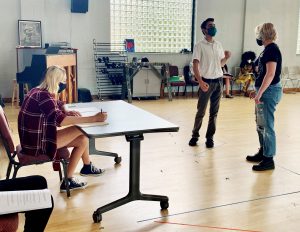 In COFFEE FOR MILES, a timid inchworm named Miles loves his wife and hates decisions. When he discovers a drink that will help him and his wife, he is faced with, unfortunately, a decision. Miles and the rest of his charismatic crew showcase the importance of confidence, trust, and community.

In TED’S TRIAL, Ted the tree couldn’t be happier in life, surrounded by his beautiful park and his best friend, a teen named Emmett. But when the city’s Mayor decides to turn the park into material for a new mall, Ted and Emmett have to team together to find a way to turn the grumpy townsfolk against him. A story about not taking what you have for granted, and finding the beauty in small things.

In MARY HAD A LITTLE LAMB, Mary Maloney is a housewife waiting for her husband, Patrick, to return home from his job as a police officer. When he returns, Mary notices he is uncharacteristically aloof. As the Maloneys’ relationship faces a potential end, the true nature of both husband and wife is revealed. Murder, misogyny, and Mary Maloney has a nice ring to it, don’t you think?

In A HOLE & ITS SHADOW, there is a man in the hole. He’s been there for years, just sitting down there with only a shadow for company. But this story isn’t about him. It’s about two friends who try to help him out, and in the process, realize that maybe he’s not the only one in a hole.

MARY HAD A LITTLE LAMB

THE HOLE & ITS SHADOW