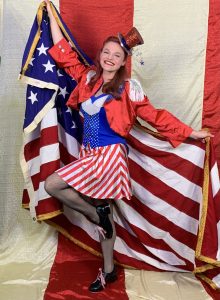 Beth Henley’s THE MISS FIRECRACKER CONTEST, coming to the Chattanooga Theatre Centre stage July 9 and running through July 25, may appear on its surface to be a comic explosion of red, glitter, and blue, but audiences will also enjoy this rich story of beauty, empowerment, and homegrown Southern values.

From the playwright who brought us the Pulitzer Prize-winning CRIMES OF THE HEART, THE MISS FIRECRACKER CONTEST is the type of Southern Gothic comedy for which Henley is best known.

The place is the small Mississippi town of Brookhaven, the time a few days before the Fourth of July. Carnelle Scott—known locally as “Miss Hot Tamale”—is rehearsing furiously for the Miss Firecracker Contest, hoping that a victory will salvage her tarnished reputation and allow her to leave town in a blaze of glory.

The unexpected arrival of her cousin Elain, a former Miss Firecracker winner (who has walked out on her rich but boring husband and her two small children), complicates matters a bit, as does the repeated threat of Elain’s eccentric brother, Delmount (recently released from a mental institution), to sell the family homestead and decamp for New Orleans.

But, aided by a touchingly awkward seamstress named Popeye (who is hopelessly smitten by Delmount) and several other cheerfully nutty characters, Carnelle perseveres—leading to a climactic conclusion of unparalleled hilarity, compassion, and moving lyricism.

A long-run Off-Broadway success, this explosively funny play demonstrates the author’s unique gift for finding rich lodes of humor—and simple wisdom—in the zany activities of small-town life. No matter who wins the Miss Firecracker Contest, the audience will come off as the winners.

The play will be presented in the mainstage theatre, where in keeping with safety protocols, capacity will be limited to 40 percent and ushers will seat patrons with several vacant seats between parties. To see the CTC’s complete safety protocols, visit TheatreCentre.com/Safety.

Performances are Fridays at 8 p.m., Saturdays at 8 p.m., Sundays at 2:30 p.m., and Thursdays at 7 p.m. Two special performances on July 17 and July 24 will be designated COVID safety performances. The theatre will be limited to 20% capacity and parties will be seated at least 6 feet from one another.