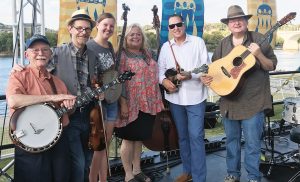 The Chattanooga Theatre Centre’s Concerts on the Lawn Series continues on Thursday, June 10, with a performance by one of the most beloved bands in the region, the New Dismembered Tennesseans, on the CTC’s riverfront lawn.

The Dismembered Tennesseans’ rousing blend of bluegrass has been going strong since 1945, when the band was formed by a group of McCallie School students. Led for many years by champion fiddler Fletcher Bright, the band has stayed together for 75 years through numerous personnel changes.

The latest lineup has infused the band with new energy and a repertoire that both honors its tradition and sends the music headlong into the future. It includes original member Doc Cullis (banjo), long-time member Laura Walker (bass and vocals), Don Cassel (mandolin and vocals), Bobby Burns (guitar and vocals), Tom Morley (fiddle and vocals), and Fletcher Bright’s granddaughter, Eleanor Bright (banjo, guitar, and vocals).

The group has appeared at the Riverbend Festival, the Kennedy Center, and festivals, fairs, and concerts around the country, sharing the stage with many top bluegrass music stars.

Next up in the CTC’s Concerts on the Lawn Series are the Natti Love Joys, a Turtletown, TN, group that plays the classic reggae of Bob Marley and others, R&B hits played in reggae style, and their own original music. They were founded by the husband-and-wife duo of Jati and Marla Allen (he played with Marley), who hail from Kingston, Jamaica, the birthplace of reggae.

With the concerts, the CTC—located adjacent to Coolidge Park in the North Shore district—is carrying forward its initiative to spotlight the local arts community with performances on its beautiful riverfront lawn and stages.

The Concerts on the Lawn Series debuted last September and attracted enthusiastic audiences ready to have an enjoyable evening out in a safe environment. The series was to resume on Thursday, June 3, with a performance by Rick Rushing & the Blues Strangers, but the concert was rained out. The group will perform at a later date, and the series will resume in the fall.

Admission to June 10’s concert is $15 for adults and $10 for students. Concessions, beer, wine, mixed drinks, and soft drinks will be available, and Basecamp Bar & Restaurant will have a taco bar set up in the theatre lobby.

The concert begins at 7 p.m., with happy hour starting at 6 p.m. Blankets and lawn chairs are welcome.