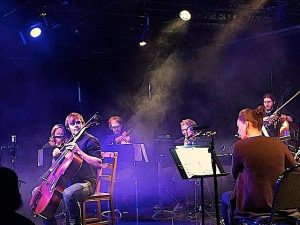 The Chattanooga Theatre Centre’s new Northshore Karass Performing Arts Series continues with a performance by the acclaimed Figment Chamber Ensemble, affably known as the Big Fig, on Tuesday, May 25, at 7 p.m. in the CTC’s riverfront lobby.

The Figment Chamber Ensemble, founded by Chattanooga musician Ben Van Winkle, is distinguished by its unique instrumentation. The program will include the Copland Clarinet Concerto; Scott McAllister’s “Black Dog,” a rhapsody for clarinet; “Misty,” “Nafulo’s Leave,” and the premiere of a composition by Chattanooga clarinetist Gordon Inman.

The Northshore Karass Series’ program content is intended to combat the stereotype of chamber music as “stuffy,” with fresh arrangements and players comprising a who’s who of Chattanooga’s young classical musicians.

Funded by an Artists Work grant from ArtsBuild, the series aims to open the Theatre Centre doors to artists throughout the community and give them opportunities to perform.

Following the Figment Chamber Ensemble concert, the series will continue with:

Snacks, beer, and wine will be served at the Big Fig concert.

Admission is $10. There will be limited capacity in keeping with safety protocols. Tickets can be purchased at 423-267-8534 and TheatreCentre.com.