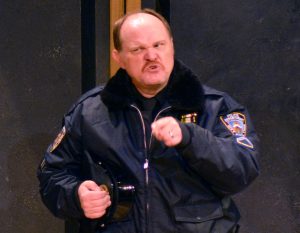 “I just love being at the Theatre Centre,” Chris says. “I love the people that I work with during the summer. It’s a fun atmosphere. I like working with the kids. I enjoy getting to see the kids get creative and write and perform their own material.” He teaches students to develop comic material based on their own lives and observations.

Chris believes that exposure to the arts sparks excitement, creativity, and other important life skills, which is why he has dedicated most of his adult life to teaching and working in the field. He finds fulfillment in teaching classes in the arts.

“Just watching kids create, seeing them put effort and get involved in what they’re doing, and be happy with what they’ve done. I find there’s a lot of encouragement between kids when they’re creating something new in the classroom. Whether it be in art or theatre,” says Chris, who this year began teaching eighth-grade theatre in addition to art classes at Tyner.

“From my experience, the kids need it,” he says. “I make sure they get up in front of the class every day, so they get to the point where they are not nervous. It helps them learn how to stand up in front of people. We’ve talked about how important that is for future job interviews or oral presentations for another class.”

Chris said he has seen how theatre has helped the students learn to work better with others. “They learn to give and take,” he says. “I’ve seen kids in my class that have not spoken to each other before but work so well together on stage. It teaches you how to react and how to be a better listener.”

He says theatre has been such a popular class, sixth- and seventh-grade students are asking when they get to participate.

Though he was born in Rocky Mount, North Carolina, Chris considers himself a Chattanooga native because his family moved here when he was in the second grade. Following high school, he attended King University in Bristol, Tennessee. It was there that he first got involved with theatre. He got a part in the musical Carousel and fell in love with acting.

He graduated with a bachelor’s degree in art and theatre and moved to Nashville where his parents had relocated during his college years. During the year he lived and worked there, he took a class in stand-up comedy at a local comedy club, which concluded with a night performing at the club. He enjoyed stand-up so much, he began performing at clubs all around Tennessee and Alabama.

Chris later moved back to Chattanooga and decided to pursue his master’s degree in secondary education and a teaching certificate at University of Tennessee in Chattanooga. During this time, he first auditioned at CTC and was cast as the telephone repairman in Barefoot in the Park and won a Miss Annie Award for his performance.

“The bug had bitten me again,” he says. “I started auditioning for everything I could at CTC. I was in several shows in the Circle and on the Mainstage. Some of my favorite shows I’ve been in are Visiting Mr. Green, The Nerd—I was the nerd—and Glengarry Glen Ross. That was very challenging and intense. I really liked that one.”

He had the opportunity to work on stage with the kids and with CTC director Scott Dunlap when he was cast as Mr. Murray in the Youth Theatre production of A Wrinkle in Time.

“Most recently, Scott directed me in Lobby Hero,” he says. “It was a challenging role and also very intense. I like those types of challenges. I had to think about that one. It was hard to get hold of the character.

“I was the oldest person in the cast by about 12 to 14 years, but it doesn’t matter,” he adds. “Because from my experience, the people in the cast always bond because CTC has such a friendly atmosphere. I enjoy meeting new people there and seeing the talent Chattanooga has on stage.”

After completing his master’s degree, he earned a long-term substitute position teaching art at Tyner Academy that turned into a permanent teaching position.

During his early years of teaching, he continued performing stand-up comedy at various clubs mostly throughout the South. He also participated in a comedy contest in Las Vegas in which he finished in eighth place. “Out of a lot of people, so I count that as a win,” he laughs.

“My experience in theatre helped in stand-up and in teaching and vice versa,” he says. “After a while, teaching became more important to me, so I started to focus more in that area.”

Sometime following his participation in Barefoot in the Park, Rodney Van Valkenburg, then CTC’s Director of Programs and now Executive Director, approached Chris about assisting newly hired CTC Director of Education and Outreach Chuck Tuttle with presenting a series of shows at area schools.

“We would put on a play at the school and the students would get to ask questions afterwards,” Chris says. “I had a lot of fun doing that. I remember when we were doing the school tours, sometimes two shows per school. We would come back to the Theatre Centre, unload the set, and I would take a nap on Chuck’s couch and wake up that night in time to go rehearse for the CTC play I was in at the time. That’s a good memory.”

Talking about other memorable CTC moments, he says, “I really enjoy the process of beginning a play. The blocking and everything like that. Reflecting on that after we have a performance. My favorite thing is when my friends and family can come see me and see a different side of me in the plays.”

As a teacher, Chris says he sees the importance of arts in education and how theatre can be such a wonderful outlet for students.

“It’s something that I’ve found that kids are hungry for,” he says. “They have a lot of distractions and live theatre is something that’s new for them.”

He adds, “I didn’t know how much they wanted and needed it until I offered theatre as a class this year. It’s a new experience for me teaching it in a school setting. And I didn’t know how well it would translate from teaching it at the CTC’s Summer Academy, which is a different kind of format.”

Chris is delighted with the students’ positive response to the class. “It’s been a pleasant surprise for me and I’m really enjoying it,” he says.

Chris says CTC’s value to the community and local youth cannot be understated. “It’s a place that encourages creativity,” he says. “In an artistic city, it’s another form of art that we have available to everyone.”

He concludes, “It’s like family to me. I may not see somebody for a long time, but I see them at the Theatre Centre and I have all these good feelings and memories flood back. When I’m there for the summer teaching, even though I’ve been gone a while, it’s like I never left.”