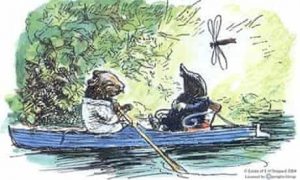 The Chattanooga Theatre Centre’s Youth Theatre returns to the stage with a dramatization of Kenneth Grahame’s beloved story THE WIND IN THE WILLOWS, cleverly adapted for the stage by the CTC’s Scott Dunlap.

Like the book, the CTC’s stage adaptation follows the adventures of a group of animal friends—home-loving Mole, willful Ratty, Badger the perennial bachelor, and the mischievous Toad—in their lives in the English countryside. But there is more here than bucolic portrayals of English country life. THE WIND IN THE WILLOWS is an endearing reflection on the nature and value of friendship.

Inspired by Downton Abbey, Monty Python, and other British comedies, Dunlap’s tale opens in Toad Hall on the banks of a peaceful river, but the goings-on are anything but peaceful. Toad, obsessed with one contraption after another, soon turns his attention to motorcars, an obsession that gets the impetuous Toad in trouble.

Will his friends Mole, Badger, and Water Rat come to the rescue, and will Toad learn a lesson from his reckless ways?

First published in 1908, Grahame’s book quickly became popular in his native England and beyond. Its fans included Winnie the Pooh author A.A. Milne and U.S. President Theodore Roosevelt, who wrote to Grahame to tell him that he had “read it and reread it, and have come to accept the characters as old friends.”

The production marks the Youth Theatre’s first time on the stage since THE LION, THE WITCH AND THE WARDROBE in February 2020, shortly before the theatre ceased production due to the coronavirus outbreak.

The production is directed by Dunlap, with Angie Griffin serving as assistant director. Bella Miller, Tate Mink, and Libby Obal are the stage managers.