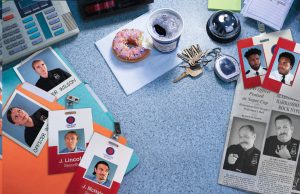 In the lobby of a high-rise apartment building, where it always feels like 3 a.m., where a luckless security guard insists he’s no doorman, and where casual conversations quickly become minefields, the lives of four ethically-challenged New Yorkers intersect with comic and dramatic results in the Chattanooga Theatre Centre’s upcoming production of LOBBY HERO.

A drama with humor, or a comedy with a bit of thoughtful reflection, LOBBY HERO centers around a hapless young security guard with big ambitions. Jeff is glib and wisecracking, but he hopes to get his life together despite his history of underachievement.

Apparently incapable of keeping his mouth shut for more than a few seconds or holding a job for much longer, he owes his post to his boss, the straight-laced William, who is supervising the graveyard shift as a stepping-stone to a management job. William took a chance on Jeff, and the two have bonded over their late-night confidences.

Into their lobby swaggers Bill, a vain but likeable veteran cop, and his admiring rookie partner, Dawn. Bill is perfectly comfortable justifying abuses of power in a profession where toxic masculinity and gender inequality come with the badge. Dawn’s hero worship is further challenged when she learns why her married partner is paying regular visits to the building.

The story gets more complicated for everyone involved when someone’s relative is arrested for murder and racial tensions flare. As the characters talk their way into one ethical quagmire after another, truth becomes elusive and loyalties are strained to the breaking point.

The play premiered off-Broadway in 2001 and went on to a Broadway revival in 2018, yet its look at sexism, racism, and police abuse of authority is even more relevant today. What the characters have to say on the subjects is both painfully funny and so pathetic it borders on the tragic. But LOBBY HERO is no agenda-driven play; the laughs come full tilt.

LOBBY HERO is the second of three productions that the CTC will present this fall, and the theatre has extensive safety protocols in place. Along with HAVING OUR SAY in October and IT’S A WONDERFUL LIFE: A LIVE RADIO PLAY coming up December 4-20, LOBBY HERO features a small cast that allows for social distancing on stage as a precaution for the actors.

The play will be presented in the mainstage theatre with general admission seating, although capacity will be limited to no more than 30 percent, and ushers will seat patrons with several vacant seats and rows between parties. To see the CTC’s 22-point safety protocol, visit TheatreCentre.com/SafetyCTC.