Theatre Centre Illuminates a Journey of Redemption as “The Amen Corner” Opens Dec. 6 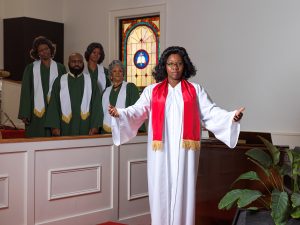 The double-edged sword of righteousness is illuminated in a poignant depiction of the power of faith in the Chattanooga Theatre Centre’s holiday production of THE AMEN CORNER, opening Friday, December 6, and running through Sunday, December 22.

To his first work for the theatre, James Baldwin, one of America’s preeminent African-American writers, brought all the fervor of the storefront churches of his childhood along with an unwavering awareness of the price those churches exacted from their worshipers.

As the story goes, Sister Margaret Alexander, a pastor in 1960s Harlem, has moved her congregation for years with a mixture of personal charisma and ferocious piety. A single mother, she has lived a public life of undying holiness and devotion to her Lord. But when her estranged husband shows up on her doorstep deathly ill, she is in danger of losing both her standing in the church and the son she has tried to keep on the godly path.

While Margaret had led everyone to believe that her husband had abandoned her with their son years ago, it was in fact Margaret who had left him and pursued a religious life. This information precipitates confrontations between Margaret, her husband, her son, and the elders of her congregation regarding what they perceive as the hypocritical nature of her religious convictions.

What follows on that Christmas is an unforgettable journey of atonement and redemption.

Adorned with resplendent gospel music, THE AMEN CORNER is a play about faith and family, about the gulf between black men and black women and black fathers and black sons. Both sorrowful and uplifting, it is considered a masterpiece of the modern American theatre.

THE AMEN CORNER is one of two holiday offerings at the CTC this season. The theatre’s production of MARY POPPINS also runs through December 22.