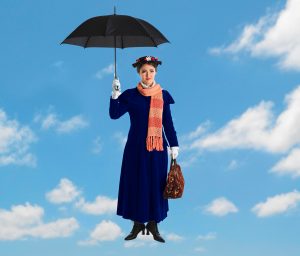 One of the most popular Disney movies of all time is capturing hearts in a whole new way as a seven-time Tony Award-nominated musical for the stage. Based on the children’s books by P.L. Travers and the classic Disney film of 1964, Disney’s and Cameron Mackintosh’s MARY POPPINS delighted audiences on Broadway for more than 2,500 performances and brings things both new and familiar to this theatrical production.

The stage show features many of the original songs made famous by the Oscar-winning duo of Richard and Robert Sherman (“Supercalifragilisticexpialidocious” and “A Spoonful of Sugar” among them), with additional music and lyrics from George Stiles and Anthony Drewe and a book by “Downton Abbey” creator Julian Fellowes.

Under the direction of Scott Dunlap, with musical direction by Michael Huseman and choreography by Lindsay Fussell, MARY POPPINS is an enchanting mixture of an irresistible story, unforgettable songs, breathtaking dance numbers, and astonishing stagecraft. And yes, if you’re wondering, the Theatre Centre’s Mary Poppins is going to fly!

As the story opens, Bert, a jack-of-all trades, introduces us to England in 1910 and the troubled Banks family. Young Jane and Michael have sent many a nanny packing before Mary Poppins arrives on their doorstep. With patience, kindness, and a little bit of magic, she must teach the family members how to value each other again. Mary Poppins takes the children on many magical and memorable adventures and teaches them—and the grown-ups in their lives—that “anything can happen if you let it.”

Taylor Williams steps into the shoes of the good-natured Bert, and James Gienapp and Greer Caldwell appear as the upper-crust George and Winifred Banks.