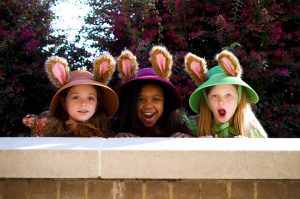 Defying his mother’s instructions, venturing into dangerous territory, one of the most endearing – and naughty – heroes of children’s literature hops from the page to the stage as the Chattanooga Theatre Centre’s Youth Theatre presents Beatrix Potter’s “The Tale of Peter Rabbit,” March 29 through April 7, 2019.

Under the direction of Youth Theatre director Scott Dunlap, 28 young actors bring the story to life in this faithful stage adaptation of Potter’s book, published in 1902 and one of the best-selling children’s books of all time.

The dramatization centers on the mischievous Peter Rabbit, whose disobedience leads to trouble. The story combines humor and adventure that will have young audiences hopping with delight while also delivering a moral lesson that youngsters can take to heart.

As the tale begins, Peter Rabbit, far more adventurous than his sisters Flopsy, Mopsy and Cottontail, is following the advice of his tummy versus the advice of his mother. Everyone knows that you stay out of Mr. McGregor’s garden, but Peter and his cousin Benjamin Bunny (adopted by this adaptation from another Potter book) squeeze under the garden gate and venture into a world filled with excitement, adventure, and scrumptious vegetables.

Audiences will meet other fun characters such as Caw and Kem, the two silly crows who know that a picket fence could never stop a bird, and the easygoing Cat, just waiting around the garden for her own meal. And, of course, there’s Mr. McGregor, the mean, befuddled farmer, who is willing to go to great lengths to protect his garden.

Ultimately, the angry farmer chases the terrified young rabbits around the garden until they finally locate the gate and return home frightened but a little wiser.

Public performances take place on March 29 and March 30 at 7 p.m. and March 30 and 31 and April 6 and 7 at 2:30 p.m. School performances are scheduled during the week of April 1. The show is appropriate for kindergartners and older.