May the Farce Be with You: “One-Man Star Wars” Comes to the Theatre Centre March 2-3 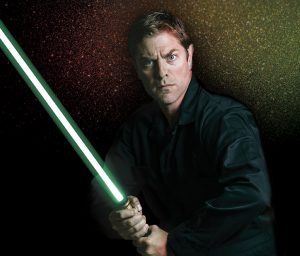 Ross single-handedly plays all the characters with spot-on voice impressions, sings the iconic music, flies the ships, fights the battles, and condenses the plots of almost 12 hours of the cinematic legend that is “Star Wars” episodes IV, V and VI into one hilarious 75-minute production. No costumes. No props. Not even a light saber.

Both writer and actor, Ross started regularly performing “One-Man Star Wars” in 2002. Officially endorsed by Lucasfilm and “Star Wars” creator George Lucas, Ross has performed his show for over a million fans in 11 countries, from Off-Broadway to London’s West End and from Dubai to the Sydney Opera House.

Ross’s stopover in Chattanooga is a fundraiser for the Theatre Centre. Saturday night’s performance also includes a Star Wars Cantina, food, drinks, light sabers, and even “Star Wars” characters milling about. The characters will also be on hand for Sunday’s matinee performance.

According to Ross, the show is suitable for “ages 6 to Yoda.”