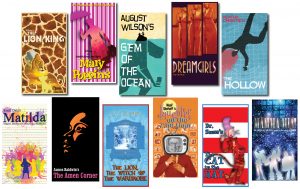 A Disney musical about a stern British nanny who’s “practically perfect in every way” and a powerhouse musical about a 1960’s girl group with a Motown-inspired score are among the highlights as the Chattanooga Theatre Centre announced its 2019-2020 season Monday, Feb. 4, at a gathering of volunteers.

From Disney to Dr. Seuss, from August Wilson to Neil Simon, musical crowd-pleasers will be complemented by classic comedies, suspenseful mysteries, stirring dramas, and endearing youth shows as the community theatre, founded in 1923, enters its 96th season in September.

Roald Dahl’s “Matilda” (Sept. 20-Oct. 13, 2019): Inspired by the twisted genius of Roald Dahl, the musical is a captivating masterpiece about the power of imagination and the inspiring story of a girl who dreams of a better life. “Matilda” has won 47 international awards and continues to thrill sold-out audiences of all ages around the world. (Directed by Katherine Tanner, musical direction by Michael Huseman and choreography by Andrew Parker) Rated G.

Disney’s “Lion King, Jr.” (Oct. 19-27, 2019): Disney’s “The Lion King” has captivated the imagination of audiences around the world. The African savannah comes to life with Simba, Rafiki and an unforgettable cast of characters as they journey from Pride Rock to the jungle and back again in this inspiring, coming-of-age tale. (Directed by Scott Dunlap, musical direction by Neshawn Calloway and choreography by Marie Dance) Rated G.

Disney’s “Mary Poppins” (Nov. 22-Dec. 22): One of the most popular Disney movies of all time is capturing hearts in a whole new way: as a “practically perfect” musical for the stage. Based on the books by P.L. Travers and the classic Disney film, “Mary Poppins” has delighted audiences on Broadway and in London, receiving nominations for nine Olivier and seven Tony Awards, including Best Musical. (Directed by Scott Dunlap, musical direction by Michael Huseman and choreography by Lindsay Fussell) Rated G.

James Baldwin’s “Amen Corner” (Dec. 6-22): After giving a fiery Sunday morning sermon, Margaret is confronted by the unexpected arrival of her long-estranged husband who collapses from illness shortly thereafter. Their son, along with elders of the congregation, struggle with the moral questions of the moment, and what follows on that Christmas is an unforgettable journey of atonement and self-discovery. (Directed by Ricardo Morris) Rated PG for mature themes.

August Wilson’s “Gem of the Ocean” (Jan. 24-Feb. 9, 2020): The CTC has committed to produce an August Wilson play, all of which focus on the African American experience in each decade of the 20th Century, for the next 10 years. “Gem of the Ocean” is set in 1904 in Pittsburgh as tension boils and as its population grows impatient with the poor working and housing conditions. “Gem of the Ocean” is about people struggling to find the meaning of freedom in an environment eager to keep the shackles locked. (Directed by Sadiqua Iman) Rated PG-13 for mature language and themes.

C.S. Lewis’ “The Lion, the Witch and the Wardrobe” (Feb. 21-29, 2020): This adaptation of C.S. Lewis’ timeless story takes audiences on an adventure to see the magic and mystery of Aslan, the great lion, his struggle with the White Witch, and the adventures of four children who inadvertently wander from an old wardrobe. The intense action features chases, duels and escapes as the witch is determined to keep Narnia in her possession and to end the reign of Aslan. This story of love, faith, courage and giving, with its triumph of good over evil, is a true celebration of life. (Directed by Scott Dunlap) Rated G.

Agatha Christie’s “The Hollow” (March 13-April 5, 2020): An unhappy game of romantic follow-the-leader explodes into murder one weekend at The Hollow, home of Sir Henry and Lucy Angkatell, arguably Christie’s finest comic grande dame. Dr. Cristow, the Harley Street playboy, is at the center of the trouble when, assembled in one place, we find his dull but devoted wife Gerda, his mistress and prominent sculptor Henrietta, and his former lover and Hollywood film star Veronica. As the weekend progresses, so does the list of potential suspects when Cristow is shot dead. (Director to be announced) Rated PG for brief violence.

Neil Simon’s “Laughter on the 23rd Floor” (March 27-April 12, 2020): Inspired by playwright Neil Simon’s youthful experience as a staff writer on Sid Caesar’s “Your Show of Shows,” with all the attendant comic drama as the harried writing staff frantically scrambles to top each other with gags while competing for the attention of star madman Max Prince. (Directed by Todd Olson) Rated R for adult language.

Dr. Seuss’ “The Cat in the Hat” (May 9-17, 2020): From the moment his tall, red-and-white-striped hat appears around the door, Sally and her brother know that the Cat in the Hat is the funniest, most mischievous cat that they have ever met. With the trickiest of tricks and the craziest of ideas, he is certainly loads of fun. He turns a rainy afternoon into an amazing adventure, but what will mum find when she gets home? (Directed by Scott Dunlap) Rated G.

“Dreamgirls” (May 29-June 21, 2020): This powerhouse musical was a Tony and Grammy Award-winning hit on Broadway that became an Academy Award-winning film sensation. “Dreamgirls” celebrates the advent of R&B in the 1960’s with a Motown-inspired score and a moving look behind-the-scenes of the entertainment business. Experience all the onstage joy and backstage drama as an up-and-coming girl group learns hard lessons about love, trust and what it takes to get to the top. (Directed by Ricardo Morris) Rated PG-13 for adult language and situations.

“Mamma Mia” (July 17-Aug. 9, 2020): People around the globe have fallen in love with the characters, story and music that make “Mamma Mia” the ultimate feel-good show. Set on a Greek island paradise on the eve of a wedding, a daughter seeks to discover the identity of her father and brings three men from her mother’s past back to the island they visited 20 years ago. The storytelling magic of ABBA’s timeless songs propels this enchanting tale of love, laughter, and friendship, with non-stop laughs and infectious dance numbers. (Director to be announced. Musical direction by Michael Huseman.) Rated PG for adult themes.

The Theatre Centre’s 2019-2020 line-up will be offered to season subscribers as a family-friendly “Family Series” and a “Next Wave Series” of works suited to adult audiences. To subscribe to the season at an early-bird discounted rate of 15 percent, call the box office at 423.267.8534.