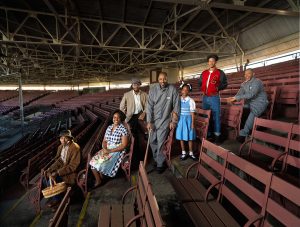 The works of playwright August Wilson chronicle the African American experience like no other has before or since, but in the Chattanooga Theatre Centre production of “Fences,” opening Feb. 15 and running through March 10, audiences will see that his themes are universal.

Hope and disappointment. Love and resentment. Loyalty and betrayal. They are themes not just of the black experience but of the human experience.

That symbolic fence alludes not just literally to the barrier middle-aged Troy Maxson procrastinates about building in the small backyard of his modest home, but to the life obstacles he has never managed to surmount in the pre-Civil Rights age.

“Fences” tells the story of the boisterous Troy, a former star of the Negro baseball leagues who now works as a garbage man in 1950’s Pittsburgh, holding court and lecturing about life from the chair in his backyard. Due to his race, Troy has been denied his shot at the big league, so when his teenage son Cory wants his own chance to excel in athletics, Troy’s bitterness threatens to tear them apart.

Like that fence, Troy draws a line between himself and those closest to him. That includes Cory, who he brutally projects his own disappointment upon by discouraging his high-school football career and potential for college recruitment; struggling musician Lyons, Troy’s mild-mannered son by a previous marriage; brother Gabriel, whose wartime injuries have rendered him mentally impaired; and best friend Bono, his sidekick since younger days. Above all, Troy shares his life with his loving, stoic, and tireless wife Rose, whose steadfast devotion to him is tested when he has an affair—and a child—with another woman.

The Theatre Centre’s production of “Fences” marks the first installment of its pledge to produce Wilson’s entire canon of 10 plays portraying the African American experience through the 20th century. It’s known as the American Century Cycle, and the CTC will produce one work a year through 2028. Next year’s season will bring Wilson’s “Gem of the Ocean,” set in 1904.

The production will be presented in the Mildred M. Montague Circle Theatre and contains adult language and mature themes.