Embark on a Calypso Adventure in the Youth Theatre’s “Once on This Island, Jr.” Feb. 2-10 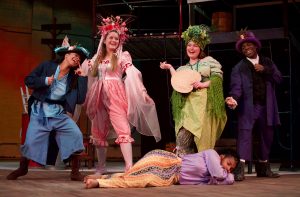 With its catchy Caribbean-flavored musical score and vibrant costumes splashing the stage with color, the Chattanooga Theatre Centre’s upcoming Youth Theatre production of “Once on This Island, Jr.” may just conger up orange sunsets and ocean breezes when this enchanting Calypso folktale opens Saturday, February 2.

Adapted for young audiences from the celebrated Broadway musical, with music and lyrics by the legendary writing team of Stephen Flaherty and Lynn Ahrens, the CTC production of “Once on This Island, Jr.” features a multicultural cast of 30 young people under the direction of Youth Theatre Director R. Scott Dunlap. The show runs through Sunday, February 10.

Through almost non-stop song and dance, this full-hearted musical tells the story of Ti Moune, a peasant girl who rescues and falls in love with Daniel, a wealthy boy from the French-descended dwellers on the other side of her island. When Daniel is returned to his people, the fantastical gods who rule the island guide Ti Moune on a quest that will test the strength of her love against the powerful forces of prejudice, hatred, and even death.

Like the Hans Christian Anderson fairy tale “The Little Mermaid” on which it is based, the young lovers live in two different worlds. The tale is as timely as ever though, as it follows Ti Moune, who is orphaned and alone following a massive storm. When she falls in love with Daniel, “Once on This Island, Jr.” brings timeless themes of race and class into the story.

Ultimately, “Once on This Island, Jr.” is a joyful hymn to community and storytelling that renders even the tragedy of death as a stirring transformation that gives back to the living.

In the Theatre Centre production, creative movement will capture the audiences’ imaginations, calling upon performers to portray trees, wild animals, and even a fierce rainstorm. Guest musical director Neshawn Bynum Calloway and guest choreographer Marie Dance contribute their talents to this rousing show.

Public performances take place on February 2, 3, 9 and 10 at 2:30 p.m. School performances are scheduled during the week of February 4. The show is appropriate for 3rd grade and up.