Celebrate the Spirit with the Theatre Centre’s “A Charlie Brown Christmas” Dec. 8-16 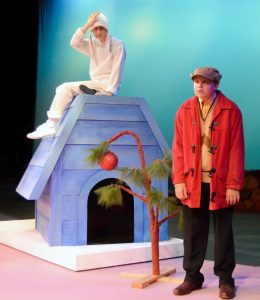 From a sad, droopy Christmas tree to a dancing dog atop a piano, there are timeless images in “A Charlie Brown Christmas” that make the Chattanooga Theatre Centre’s upcoming stage adaptation a faithful reflection of the classic animated TV special. The stage show, a production of the CTC’s Youth Theatre, opens December 8 and runs through December 16.

Under the direction of Chuck Tuttle, the Theatre Centre’s director of education and outreach, 22 young actors bring the story to life through familiar scenes and music. Through the course of the show, Charlie Brown, Snoopy, and the rest of the Peanuts gang discover the true meaning of Christmas.

Based on the characters created by Charles M. Schulz and the TV special that first aired in 1965, the stage version of “A Charlie Brown Christmas” premiered in 2013 and includes Vince Guaraldi’s well-known jazz music from the TV show.

As the familiar story goes, Charlie Brown is feeling glum despite the arrival of the cheerful holiday season. When he complains about the overwhelming materialism he sees, Lucy suggests that he direct the school Christmas pageant. Charlie Brown accepts, but his best efforts are ignored and mocked by his peers.

When an attempt to restore the proper holiday spirit with a forlorn little Christmas tree fails, Charlie Brown, at his wit’s end, loudly asks if anybody knows what Christmas is all about. As Linus tells him about the true meaning of Christmas, Charlie Brown cheers up, and the Peanuts gang unites to celebrate the holiday season.

Public performances take place on December 8, 9, 15 and 16 at 2:30 p.m. School performances are scheduled during the week of December 10. The show is appropriate for 1st grade and up.

The Theatre Centre is also marking the holiday season with a production for audiences of all ages of Paula Vogel’s “A Civil War Christmas: An American Musical Celebration,” running December 14-30.

Tickets for both shows are available at the CTC box office at (423) 267-8534 or online at TheatreCentre.com.