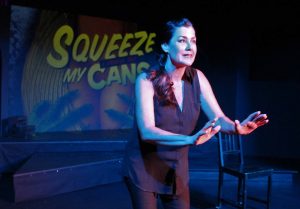 What would you do if the carrot of spiritual freedom was dangled in front of you, waiting to be seized? Writer-performer Cathy Schenkelberg decided to chase it, and what she found was Scientology. Spending most of her young adult life entangled in the controversial church, she emerged to share her story in “Squeeze My Cans,” a no-holds-barred cautionary tale of how she survived “America’s foremost intergalactic theology.” Her compelling one-woman show comes to the Chattanooga Theatre Centre for three performances Friday through Sunday, Nov. 16-18.

Simultaneously hilarious and heartbreaking, “Squeeze My Cans” takes audiences on Schenkelberg’s journey of a young woman looking for her place and purpose in the world – and comes out two decades later and about a million dollars poorer. It’s a funny, intimate, and shocking story about the power of survival through persistence and humor.

Schenkelberg’s introduction to Scientology was innocent enough; as a young 20-something struggling to make a life for herself, uncertain where to turn for answers, a friend gave her a book (Dianetics) and an appointment to meet with someone named Rich at the Fine Arts Building in downtown Chicago.

Schenkelberg says she was ensnared in the Scientology “cult” for 14 years; it took another five years to leave them behind in the face of harassing phone calls, midnight knocks on her door by “outreach” staffers, an expensive custody battle, and constant paranoia about the monitoring of her every move.

Schenkelberg premiered her one-woman show in Chicago in 2016 and has gone on to perform it throughout the U.S. and overseas. In presenting this cautionary tale, she says she hopes to reach anyone who feels lost, desperate and alone, searching for answers to life’s problems, anyone who has lost a loved one to a damaging cult, and anyone who has already given up their identity and life savings to organizations like Scientology.

“Squeeze My Cans” is recommended for ages 14 and up due to sexual content.