Theatre Centre Journeys Across the Stars in “A Wrinkle in Time” Nov. 3-11 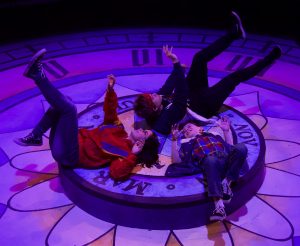 Although Madeline L’Engle’s 1962 science fiction children’s novel “A Wrinkle in Time” is characterized by an interstellar storyline and populated by otherworldly beings, the James Sie stage adaptation that the Chattanooga Theatre Centre’s Youth Theatre will present November 3-11 remains a heartwarming tale with fundamental themes of empowering young people and helping them find their self-worth.

On the heels of a Disney movie version released earlier this year, the CTC and director R. Scott Dunlap take on this challenging and much more faithful adaption of the beloved novel. With a cast of 14 young actors and three adults, the theatre brings the cosmos to the stage for performances on November 3, 4, 10 and 11 at 2:30 p.m.

One of literature’s most enduring young heroines, Meg is the quintessential square peg, a middle-school math whiz and self-declared oddball with a short temper. Her teachers and classmates see her as troublesome and stubborn. Her family sees her as immature but capable of doing great things.

But when Meg and her telepathic little brother Charles Wallace set off to find their missing father, they’re catapulted across time and space to a world where being different isn’t just an annoyance; it can cost you your life.

That’s when three celestial beings, Mrs. Whatsit, Mrs. Who, and Mrs. Which, appear with a promise to help rescue the children’s father from the monstrous darkness that threatens the universe. Meg, Charles Wallace, their pal Calvin, and a host of extraterrestrial friends and foes journey into the heart of a terrible evil.

Meg will have to undergo all kinds of tests of her character and fortitude to battle the forces of evil, save the universe, and put her family back together.

Mason Chattin-Carter and Carina Miller are the stage managers. The Pop-Up Project, a performing arts group in residence at the CTC, choreographed the “Tesseract,” a portal through space and time that fans of the book will be familiar with.

The show is appropriate for 4th grade and up.

Tickets are available at the Theatre Centre box office at (423) 267-8534 and online at TheatreCentre.com.