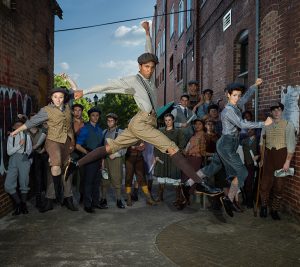 Extra! Extra! Read all about it! The headline of the day at the Chattanooga Theatre Centre is the season-opening production of the exuberant Disney musical “Newsies,” which launches the theatre’s 2018-2019 season on Friday, Sept. 21, and continues its run through Sunday, Oct. 14.

Inspired by the real-life Newsboys Strike of 1899 in New York City, “Newsies” revolves around charismatic Jack Kelly (Normand Caissie in his CTC debut), a boy who sells newspapers on the streets — aka “newsie” — who is living among a group of other young newsies, most of them homeless or orphaned. Jack dreams of a better life far from the hardship of the streets.

Among his clan are disabled friend Crutchie (Austin Massey) and Davey (Will Lowery) and Davey’s young brother Les (Alex Champion), who have joined the group after their father becomes unable to work. When powerful publisher Joseph Pulitzer (Rodney Van Valkenburg) decides to raise the cost of the newspapers to the boys by a dime, Jack finds a cause to fight for and leads a young army to protest and eventually strike.

Caught up in the middle of all this is the spirited Katherine Plumber (Kimberly Rye), a reporter trying to build a career beyond the social pages. While covering the strike despite Pulitzer’s call for a media blackout of it, she takes a fancy to Jack.

Based on the Disney film written by Bob Tzudiker and Noni White, “Newsies” features a book by Harvey Fierstein, lyrics by Jack Feldman, and music by legendary composer Alan Menken. Nominated for eight Tony Awards in 2012, it won two, for choreography and music.

While the story is inspirational in an idealistic David-and-Goliath way, the unbridled exuberance of the music and dance is what is bound to bring down the house. The vibrant music embodies the courage and idealism of the determined newsies, and the high-spirited dance is energetic, athletic, and acrobatic. Featuring local high school and college students and adults, the Theatre Centre has assembled some of the most talented dancers in the community. The show features more than 40 people in the all-volunteer cast.

Reservations are highly recommended. For tickets, visit the Theatre Centre box office at 400 River Street next to Coolidge Park, call the box office at (423) 267-8534, or purchase online at TheatreCentre.com.