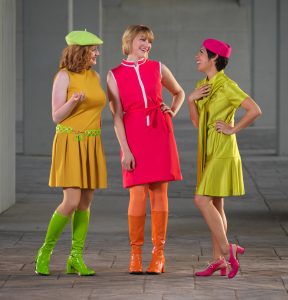 A riotous farce that enjoyed hit revivals in London and New York, “Boeing Boeing” is touching down in Chattanooga as the groovy 1960’s comedy opens at the Chattanooga Theatre Centre on Friday, June 8, and runs through Sunday, June 24.

A 1960’s farce by French playwright Marc Camoletti translated for English-speaking audiences by Beverly Cross and Francis Evans, the revival of “Boeing Boeing” opened on Broadway in 2012 and earned a Tony Award for Best Revival of a Play and several other nominations.

Under the helm of guest director Rodney Van Valkenburg, “Boeing Boeing” will take audiences back to a time of stewardesses – not flight attendants – and mod dresses, go-go boots and infectious dance music.

The classic physical comedy is designed for laughs. It’s the 1960s, and swinging bachelor Bernard couldn’t be happier: an apartment in Paris and three gorgeous stewardesses, all from competing airlines and all engaged to him without knowing about the other. One is American, one is Italian, one is German, and they’re all head-over-heels for lovable Bernard.

Ingeniously, he’s arranged it so that their layovers don’t overlap, keeping each woman on a perfect rotation in and out of his life. Until, that is, the airlines begin employing the speedy Boeing aircraft, cutting down travel times and creating a nightmare scenario in which all three are in town at the same time.

In the calm before the storm, Bernard’s friend Robert comes to town and is thrust into the position of helping housekeeper Berthe cover for Bernard. Until, of course, the ruse comes crashing down. So fasten your seatbelts. It’s going to be a bumpy ride.

The show will be presented in the Circle Theatre with limited seating. Reservations are recommended. For tickets, call the Theatre Centre box office at (423) 267-8534 or visit TheatreCentre.com.