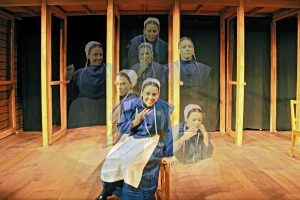 On October 2, 2006, a man walked into a one-room Amish schoolhouse in Lancaster County, Pennsylvania, and opened fire, killing five girls and himself. Then, later that same day, in an act that shocked the world, the Amish community forgave the gunman, offered aid to his grieving widow, and displayed unprecedented forgiveness and compassion.

The Chattanooga Theatre Centre is pleased to present THE AMISH PROJECT, a one-woman show inspired by the event, for one performance only on Sunday, May 20, at 2:30 p.m. The production, featuring an unforgettable tour-de-force performance by award-winning actress Katherine Michelle Tanner, is about the mystical world of the Amish and the ultimate limits of forgiveness.

“Every day is the right day to tell a story about forgiveness and healing,” says CTC Executive Director Todd Olson, who directed this production in Oklahoma City for the 20th anniversary of the tragic event. “A local critic there asserted, ‘This play is an OUR TOWN for today. I believe it should become required viewing for every high school in the nation,’ and I have to agree with her.”

Given the timeliness of the subject, the Theatre Centre is presenting THE AMISH PROJECT as a public service to the community, and admission prices reflect that intent.

“We feel so strongly about this story and its message,” says Olson, “admission will be on a ‘pay-what-you-can’ basis. Patrons can attend for literally any price. This profound play is something for the ages, and our objective is to make the play accessible to everyone in the community.”

Though it’s a one-woman play, Tanner plays seven characters who were all touched by the events. BroadwayWorld.com described Tanner’s performance as “simply captivating. She transforms magically into each character, without a moment of hesitation. This is true artistry of a multi-talented stage veteran. Miss Tanner gives a riveting, unforgettable performance, unlike any I have seen in years. Spellbinding! Do not miss it! You won’t forgive yourself!”

Tickets are on sale at the Theatre Centre box office at 400 River Street. Box office hours are Tuesday through Friday from 9 a.m. to 5 p.m. Tickets are also available by calling the box office at (423) 267-8534 or by visiting TheatreCentre.com.