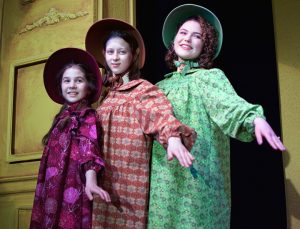 The beloved characters of children’s author Arnold Lobel hop from page to stage in “A Year with Frog and Toad,” a story of adventure and friendship coming to the Chattanooga Theatre Centre stage March 23-31, 2018.

A whimsical musical written by brothers Robert (music) and Willie Reale (book and lyrics), based on the “Frog and Toad” children’s stories written and illustrated by Lobel, the Theatre for Young Audiences production follows the woodland adventures of two amphibious friends, a curmudgeonly toad and a cheerful frog, with their colorful hopping, crawling and flying companions, over the course of a year.

Following its premiere on Broadway in 2003, “A Year with Frog and Toad” was nominated for three Tony Awards, including Best Musical. The upbeat score entertains with plenty of wit, making it an inventive, exuberant and enchanting musical for the whole family.

The production follows Frog and Toad through four colorful seasons, from hibernation to hibernation. Frog and Toad, along with their quirky friends Snail, Turtle, the Birds and more, go through many adventures, from rushing down a hill in a runaway sled in the winter to taking a picnic in the summer, learning life lessons along the way. The best friends celebrate and rejoice in the differences that make them unique. The adaptation is structured as joyful vignettes, which feature catchy tunes (such as Snail’s “I’m Coming Out of My Shell”), funny dialogue and bright, memorable characters.

The production is directed by Chuck Tuttle, the theatre’s Director of Education and Outreach. Grammy Award-winning composer Michael Huseman is the music director.