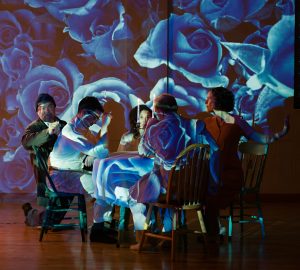 Perhaps no play in the modern theatre has so captured the imagination of the American public as Tennessee Williams’ masterpiece The Glass Menagerie. The young writer’s first successful play, it catapulted him from obscurity to fame when it premiered on Broadway in 1945.

The Chattanooga Theatre Centre re-examines the play’s origins and undeniable power in its upcoming production of the classic, opening Friday, March 9, and continuing through Sunday, March 25.

The play has strong autobiographical elements that mirror the celebrated playwright’s tumultuous life. Years after he left his mother and sister, Tom Wingfield struggles to absolve himself of the guilt of abandoning his family just as his father did. In front of the audience, he summons scenes from the past – 1937 in St. Louis – where he lived in a small apartment with his faded Southern belle of a mother and shy and withdrawn sister. There they struggled to get by financially, dreamed of the past and what could have been, and worried about what would become of Laura.

The Theatre Centre production gives the work a compelling interpretation that will captivate audiences. Director Todd Olson, who joined the Theatre Centre as executive director last year and is making his CTC directing debut, turned to Williams’ original publication of the play, not the acting editions that evolved over time, to bring the story to the stage. The CTC production is also distinguished by light projections by Philip Luckey that will illuminate designer Sarah Miecielica’s set.

Perhaps the Theatre Centre’s most unique interpretation of the play is Olson’s choice to divide the central character of Tom between two actors. Veteran CTC actor Rob Inman plays Tom in the present, and directs his narrative to the audience as he reflects on the past. Christian Smith, who most recently appeared in Beauty and the Beast and A Midsummer Night’s Disco, plays the role of Tom in the past and interacts with the rest of the characters.

The strong ensemble is rounded out by Magge Cabrera-Hudgins as Amanda, Tia Strickland as Laura, and Jacob Moore as Jim.

The show will be presented in the Circle Theatre with limited seating. Reservations are recommended. For tickets, call the box office at (423) 267-8534 or visit TheatreCentre.com.