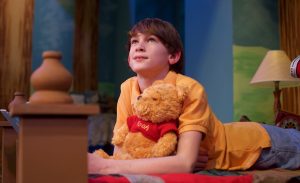 Faithful friends like Piglet, Tigger, Eeyore, and a lovable bear called Winnie-the-Pooh can be counted on to warm Christopher Robin’s heart – and the audience’s too – as the Theatre Centre brings to the stage “The House at Pooh Corner,” a charming production faithfully based on the A. A. Milne classic of the same name. Adapted for the stage by Bettye Knapp, the Youth Theatre production opens Friday, Feb. 16, and continues through Feb. 25.

Since 1926, Winnie-the-Pooh and his friends have endured as the unforgettable creations of Milne, who wrote the stories for his son, Christopher Robin. As this tale from Milne’s second collection of stories opens, the character of young Christopher Robin has called a “mergency” meeting. He has decided to run away with his friends Pooh, Piglet, Eeyore, Tigger, and the gang. Probably they’ll go to the North Pole or to the South Pole.

Why? There is a dark, mysterious threat that Christopher Robin is to be sent away to “Education.” Nobody knows exactly what or where that is, and if he’s sent to such a distant place, what can his friends possibly do without him? So it’s generally agreed that they’ll run away. As the situation becomes clearer, Christopher Robin isn’t quite so sure that running away is the answer.

Guest director James Ogden, who delighted audiences as the title character in last summer’s “Peter and the Starcatcher,” makes his CTC directing debut with “The House at Pooh Corner.” Two casts of young actors will perform on alternating days. The theatre typically selects two casts of young actors who perform on alternate days of the run, giving more young people the opportunity to take part in Youth Theatre productions.

Will Tutor and Olivia Kelly are the student stage managers.