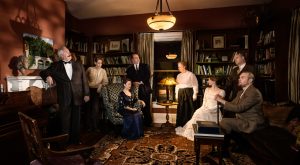 In 1920, a young, unknown British writer named Agatha Christie, acting on a dare from her sister Madge, published her first novel, “The Mysterious Affair at Styles,” and the rest, as they say, is history. While it launched Christie’s career as one of the greatest mystery writers of all time, the story wasn’t adapted for the stage until 2012. So the Chattanooga Theatre Centre’s upcoming production of the stage adaptation could be called an old play or a new play. Either way, it will keep you guessing until the end.

The story is set in Essex, England, during the summer of 1917. Back from the war, Captain Arthur Hastings convalesces at Styles Court. But when the lady of the house suspiciously dies, the tranquil manor turns treacherous. The cause is murder and the killer could be anyone: her unappealing new husband, her ne’er-do-well son, the blunt female groundskeeper, even the local toxicologist. Enter Hercule Poirot, a brilliant Belgian refugee making his debut as Christie’s detective extraordinaire, who applies his famous brain to the seemingly unsolvable mystery.

Featured in the pivotal role as Poirot, one of the great detectives of English literature, is Patrick Brady, making his third appearance on the Theatre Centre stage. Brady previously delighted audiences as the singing Kris Kringle in last season’s “Miracle on 34th Street” and earlier in another Agatha Christie classic, “And Then There Were None.”

The production is helmed by guest director Steve Ray, head of the UTC Theatre Department. Alexis Newson, who most recently appeared as Babette in the CTC production of “Beauty and the Beast,” is the stage manager.

What: Agatha Christie’s “The Mysterious Affair at Styles”