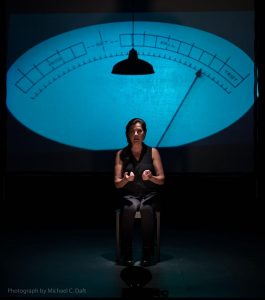 Written and Performed by Cathy Schenkelberg

Chattanooga Theatre Centre Circle Theatre
$20 general admission (includes one drink ticket)
Winner – “Pick of the Fringe” 2017 Edinborough Fringe Festival
“Heart-pumping and electrifying.” —Edge Media Network
“As powerful a solo show as you are likely to see. Whether we’re talking about structure, humor, talent or social relevance, it connects on all levels. #2 of top 10 Tampa Bay shows of 2017.”
-Tampa Bay Times
“This implausible journey is very well-written and superbly performed.” -Buzz Center Stage
The Church of $cientology had actress Cathy Schenkelberg for 14 years, and in her original solo show SQUEEZE MY CANS, she narrates the roller coaster ride down the “rabbit hole” that was her life.Simultaneously hilarious, heartbreaking, and redemptive, SQUEEZE MY CANS is more than just an audition to be Tom Cruise’s girlfriend. In 75 minutes Schenkelberg takes you on her journey of a 20-something looking for her place and purpose in the world…and comes out two decades later (and about a million dollars poorer). Directed by Shirley Anderson, SQUEEZE MY CANS is afunny, intimate, and shocking story about the power of survival through persistence and humor.
14+ / Sexual Content