Putting Teens and Theatre Together 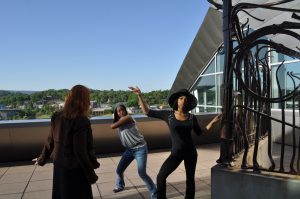 Next meeting August 29 at 7PM

TheatreQuest is a theatre interest group sponsored by the Chattanooga Theatre Centre for the purpose of preparing teens for future study or a vocation in the theatre. TheatreQuest strives to provide its members theatre experiences and opportunities they would not normally get in their schools or the community at large. By doing so, members gain a broader understanding of the potential and power of theatre.

Who Can Be a Member?

Any young person between the ages of 13 and 19 can be a member of TheatreQuest. Members must attend regular membership meetings and be involved in at least one major event throughout the year.

When Are the Meetings?

General membership meetings are the first Monday of every month (Sept. – May) at 7:00 PM, unless it falls on a holiday.

What Kinds of Activities Does TheatreQuest Do?

TheatreQuest activities vary from year to year, but they are always theatrical in nature and geared to increasing the members understanding of, and ability to do theatre. Here are a few past TheatreQuest projects:

Alphabet Plays (One to two plays per year, three Saturdays) – Created by members for pre-school and early school aged children, these plays focus on words beginning with the specified letter of the alphabet. In the form of a sketch comedy show, the players use 30 words in 30 minutes. If they can’t get through them all, someone gets a pie in the face. 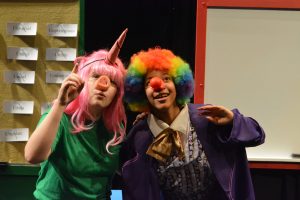 We occasionally use video segments in our live Alphabet play performances. Check out some videos from past plays

Dancing in the Dark

How to Make a Capital N

The Unauthorized History of the Letter W

Coffeehouse Cabaret (one to two selected Fridays during the year) – An evening of comedy and music created by the members. Admission is free with a fee for drinks and desserts. Next Coffeehouse is Friday, April .

Play to be determined –Whether an original piece or an original re-mix of classic theatre, this play is produced entirely by TheatreQuest members.

How Do You Join TheatreQuest?

To join, you need only come to one of the general membership meetings on the first Monday of the month (2nd Monday in September) at 7 pm. You may also email us here, or call the director of education, Chuck Tuttle at 267-8538, ext. 313.