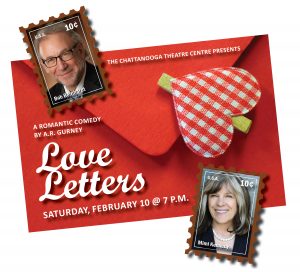 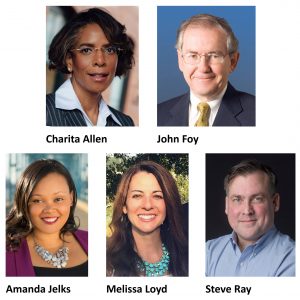 The Theatre Centre has appointed five new members to our board of directors, each of whom brings valuable personal and professional skills to our organization’s governing board.

Charita is Deputy Administrator for Economic Development with the City of Chattanooga. She has more than 15 years of experience assisting expanding and relocating businesses with access to economic development programs and professional services. With a background in non-profits, Charita also has significant experience in program development, grant writing and major gift solicitations.

John is chairman, CEO and owner of Noon LLC and chairman of Noon Management LLC, an investment company headquartered in Chattanooga. John previously held executive roles with CBL & Associates Properties, including Vice Chairman of the Board of Directors and Chief Financial Officer. Upon his retirement in 2012, he formed a group of companies specializing in various industries including wealth management, capital investing, real estate development and health care.

Melissa is a former elementary school teacher who is a dedicated volunteer in the community. She is active with the parent organizations at Big Ridge Elementary School and Center for Creative Arts. She also serves on the board of directors of Emily’s Power for a Cure, a local foundation that empowers families and funds research to fight childhood cancer.

Jim Nabors, Once an Actor on Our Stage, Passes Away at Age 87 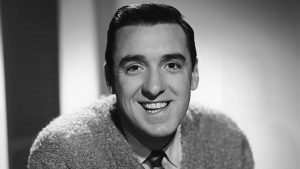 Actor and singer Jim Nabors, who came to fame playing the lovable Gomer Pyle on “The Andy Griffith Show,” passed away today at the age of 87. Our condolences go out to his family, friends and fans, but his loss hits close to home. There are those in Chattanooga Theatre Centre circles who know that decades ago, Jim appeared on our stage when we operated as the Little Theatre.

Jim was born in Sylacauga, Alabama, where he sang for his high school and church. He attended the University of Alabama, where he tried his hand at acting. After graduation, he moved to New York City, where he worked as a typist for the United Nations, but after a year, he moved to Chattanooga, where he got his first job in the TV industry as a film cutter. It was during his days in our city that Jim auditioned and earned a role in the Little Theatre’s production of “A Fireman’s Flame,” a melodramatic musical about the life of the red-hot hose boys in the days of the volunteer firemen.

We don’t know much more than that. If you know any details, such as when the show was staged, what role Jim played, or stories about his experience here, please share! Email Julie at [email protected]