Ready for the Stage? 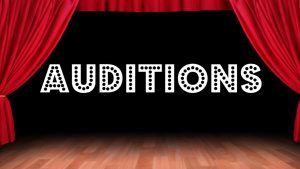 Audition dates for later shows to be announced.

Auditions for AUGUST: OSAGE COUNTY will be held Monday and Tuesday, August 15-16, at 7 p.m. with callbacks on Wednesday, August 17.

No video auditions will be permitted. The actor cast as Jean must be age 16 or older.

The play will be performed as written with mature language and mature situations.

Performances are October 28 through November 13.

Winner of the 2008 Pulitzer Prize and Tony Award

A vanished father. A pill-popping mother. Three sisters harboring shady little secrets. When the large Weston family unexpectedly reunites after Dad disappears, their Oklahoman family homestead explodes in a maelstrom of repressed truths and unsettling secrets. Mix in Violet, the drugged-up, scathingly acidic matriarch, and you’ve got a major play that unflinchingly–and uproariously–explodes the dark side of the Midwestern American family.

Jean Fordham, their daughter, 14 years old (actor must be at least 16)

Thank you to all who auditioned for “The Sound of Music!”  We feel so lucky to get to meet and work with these amazingly talented kids. We were so impressed with all who auditioned, and this was a very difficult choice. You all should be very proud of yourselves for being brave enough to audition and we hope to see you all again at our next audition October 3 and 4 for “The Best Christmas Pageant Ever, the Musical!” There is a large children’s ensemble and many more roles for kids in that show.

First meeting will be Friday at 7:00 PM for both PARENTS and cast members. Please check-in with us in the Circle Lobby.

Those cast should confirm their acceptance to participate in THE SOUND OF MUSIC by emailing [email protected].

Listed alphabetically by last name below are the children cast as the Von Trapp Family: