CTC Appoints Shadrina Booker & Darleene Cole to Board of Directors 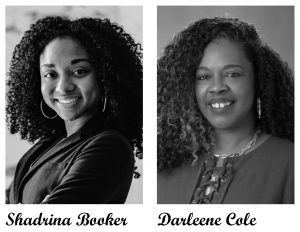 The Chattanooga Theatre Centre has appointed two new members to its board of directors, both of whom bring valuable professional and personal skills to the non-profit organization’s governing board.

With BBBS, Booker builds relationships with stakeholders and ensures that everything about the agency shows an accurate visual depiction as to who the organization is. She and her husband also launched Vityle Media, a creative agency that assists non-profits and businesses to thrive through digital media.

Booker attended performing arts middle and high schools in Miami, FL, and has served as the lighting designer and technical director for dance and musical productions.

Cole, a 29-year veteran of the Tennessee Aquarium, oversees over 300 volunteers in various capacities with the non-profit, connecting people to nature and empowering them to make informed decisions about water and wildlife.

Cole has made three appearances on the Theatre Centre stage, most recently as the theatre made its return to the stage with Having Our Say: The Delany Sisters’ First 100 Years in October 2020.

Founded in 1923, the Chattanooga Theatre Centre is one of the oldest and largest community theatres in the Southeast and produces high-caliber theatrical productions and provides volunteer and educational opportunities for people of all ages.