With 3 Shows on the Horizon, Patience Is a Virtue for CTC Actors and Audiences 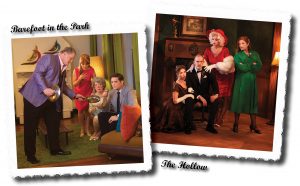 Actors at the Chattanooga Theatre Centre are seeing that patience pays off. Two shows that were sidelined by the pandemic—one just hours from opening and another two weeks away—are finally reaching the stage, with most of the original casts intact.

Weeks of hard work had gone into preparing for the productions of Agatha Christie’s THE HOLLOW and Neil Simon’s BAREFOOT IN THE PARK, but both saw their March 2020 openings postponed by two weeks, then two months, then indefinitely. Now, they’re back and kicking off the CTC’s 98th season.

While schedule conflicts and life itself—in one case the birth of a baby—meant some actors couldn’t return to their roles, most are back in rehearsals, refreshing their memories as to when to say what and when to walk where. After a year and a half on hold, both casts are thrilled to be back at it.

Patience has paid off as well for audiences who love a good comedy or mystery, with both shows written by the masters of their respective genres. The CTC also has something fun for audiences coming up for the holidays, the Youth Theatre’s A CHARLIE BROWN CHRISTMAS, which will run December 10-19. (Auditions will be announced soon.)

The previously announced 2020-2021 season is on indefinite hold, but plans for the winter, spring, and summer of 2022 are in the works.

After seven months of a dark theatre, the CTC resumed production in September 2020, selecting plays with small casts that allowed for social distancing on stage for the actors’ well-being. Audience capacity was limited to 20% with socially distanced seating, and strict safety protocols were put in place.

Dedicated actors performed in six productions (HAVING OUR SAY, LOBBY HERO, IT’S A WONDERFUL LIFE: A LIVE RADIO PLAY, ALMOST MAINE, THE WIND IN THE WILLOWS, and VINTAGE HITCHCOCK: A LIVE RADIO PLAY) in front of intentionally limited audiences, who nonetheless enjoyed great theatre in a safe environment.

With July’s THE MISS FIRECRACKER CONTEST and August’s WORKING, audience capacity was increased to 40% with safety protocols still in place.

BAREFOOT IN THE PARK will likewise have a 40% capacity, but because it will be performed in the more intimate Circle Theatre—unlike the previous shows that were staged in the larger Mainstage Theatre—the CTC will require patrons to provide proof of vaccination or a recent negative COVID test. Seating will be socially distanced, and face masks will be required.

The CTC continues to take every step to ensure the safest environment possible—even installing an ionization air purification system that removes 99.4% of viruses like COVID-19 from indoor air—but the theatre is committed to fulfilling its mission to provide exceptional experiences for the community. Including its actors, who have found that patience is indeed a virtue.

Tickets are already on sale for all three shows. Call the Box Office at 423.267.8534 or visit TheatreCentre.com.