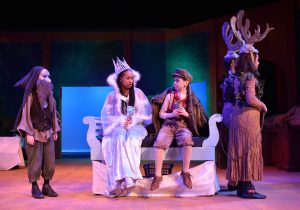 Local youth will once again leap onto the Chattanooga Theatre Centre stage in the upcoming production of The Wind in the Willows thanks to the writing talents of CTC Director of Productions Scott Dunlap. The CTC is bringing the Youth Theatre back to its stage for the first time in over a year after being sidelined by the coronavirus outbreak.

“We needed shows that could be staged on the set of The Hollow,” Scott says. “When we looked at youth shows to be done with it, I thought Toad Hall could use that set.”

The CTC had originally built the mansion style set to be used for both The Lion, the Witch and the Wardrobe in February 2020 and Agatha Christie’s The Hollow, which was set to open March 13 of the 2020 season but was put on hold due to the virus shutdown.

With hopes of presenting The Hollow at a future date, the CTC has been choosing shows to produce that can be reimagined within the same box set and can be performed within COVID-19 guidelines. Scott has worked his artistic magic repeatedly and beautifully transforming the set for each show this season.

Scott has a history of brilliantly blending his love of theatre and film for many of the shows he directs and this one is no exception. Inspired by his love of The Wind in the Willows book, the 1949 Disney animated film The Adventures of Ichabod and Mr. Toad, and the former Mr. Toad’s Wild Ride Disneyland attraction, Scott decided to adapt the story for the stage himself.

Once Scott had settled on The Wind in the Willows, he began searching for a script. He couldn’t find an adaptation with a limited cast—a smaller cast allows for social distancing on stage—or one that “wasn’t modernized to make them hip or wasn’t sickening sweet without any bite that made them fun.” So Scott decided to write his own adaptation to fit the bill.

“I mostly adapted it from the book, which I love,” he says. “I also put a little bit of my own sense of humor. A lot of people think it is too prim and proper and seems to stiff. So, you have to find a way to take that and make it funny.”

Scott is no stranger to writing for the stage. The Jungle Book, Snow White and the Seven Dwarves, The Snow Queen and Sleeping Beauty are among the many stage adaptations he has written for both CTC and Baylor School productions.

“I start with the book itself, eliminating the descriptors and then adding what’s understandable for a young audience,” he says. “Then I need to build it back up and decide what I need to make it make sense. In this case, there were limitations of what I could write for the scenes considering their location and number.”

“In the past, in order to fit in all those missing pieces, I’ve used narrators, but with this one, I’ve not used any narration and just let it come straight from the characters,” he says. “It’s also challenging to write something that appeals to adults and kids as well.”

Scott says though this writing process was not as enjoyable as past scripts due to the COVID-19 limitations and time constraints, “it felt more like a writing project with a due date.” He adds, “The enjoyable part has been working with the kids. You can tell they have been starving and ready to get into doing something. It is very directable for the kids. There is a lot to talk and think about with them. To talk about what’s really happening in the story and relate it to their lives in some way.”

Scott says despite the challenges of the COVID-19 limitations of keeping the double cast of kids at separate rehearsals without the benefit of watching their counterparts, having to wear masks and social distance, it has all been going well, without any major issues. He said the kids have learned to adapt. “Acting with masks, you have to use your voice even stronger and act more with your whole body,” he says.

Not only are the two casts going to have a delightful time performing again, but so will those in the audience enjoy the experience.

Scott concludes, “I think it’s going to be really fun and silly and something really perfect for escape right now.”

The Wind in the Willows opens March 19 and runs through March 28. Tickets can be purchased at http://bit.ly/3sGdlzh.