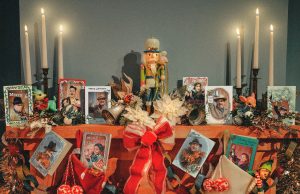 Among the stars of the Chattanooga Theatre Centre’s upcoming production: a plastic comb, a metal bucket, and a sack of silverware. That’s because the theatre’s retelling of “It’s a Wonderful Life” will use a multitude of objects to create sound effects for its onstage 1940’s radio show adaptation of the beloved holiday classic.

Playwright Joe Landry has adapted the Frank Capra movie for the stage, and the result is IT’S A WONDERFUL LIFE: A LIVE RADIO PLAY, opening Friday, December 4, and running through Sunday, December 20, at the CTC.

The adaptation is a fresh and inventive way to reconnect with the classic story of the idealistic George Bailey from the small town of Bedford Falls. It reimagines the cinematic classic by staging the story as if it were a live radio broadcast in front of a studio audience. Playing three dozen characters, a cast of five actors stands behind old-fashioned microphones and performs from scripts on a stage dressed as a 1940’s radio studio, complete with “Applause” signs and a piano.

Rounding out the cast is an onstage Foley sound effects artist, who uses clever techniques to simulate ringing telephones, footsteps in the snow, chirping crickets, and much more. The show even includes commercial breaks inspired by those of the period, in the CTC’s case featuring two Chattanooga businesses that have been in operation since that time.

This heartwarming adaptation is a show within a show. It’s Christmas Eve 1946 at WLTC Radio, and a cast is preparing to present “It’s a Wonderful Life” live to the listening audience. With the help of the Foley artist, the ensemble re-enacts the story of George, a young man whose dreams of traveling the world are thwarted by his sense of responsibility to the family business.

Disheartened and down on his luck, George is at the end of his rope. He questions his purpose in life and considers ending it all. Divine intervention arrives in the form of a bumbling guardian angel, Clarence, who is on a mission to restore George’s will to live—and earn his wings in the process.

By showing George what Bedford Falls and loved ones would have been like if he had never been born, Clarence reawakens George’s appreciation of his life and the people he loves and reminds him that he has had, after all, a wonderful life. George understands the true spirit of the holidays, and an angel gets his wings.

The play will be presented in the mainstage theatre with general admission seating, although capacity will be limited to no more than 20 percent and ushers will seat patrons with several vacant seats and rows between parties. To see the CTC’s 22-point safety protocol, visit TheatreCentre.com/Safety.