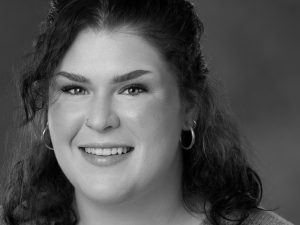 As the CTC’s new Box Office Manager, Katey fields incoming calls and sells tickets. “I get to talk to a lot of interesting people every day,” she says. “People who have been subscribers and patrons for years; people that love the arts here in Chattanooga.”

Katey became the Box Office Manager after Patron Services Director Wayne Shock retired in August after 22 years of service to the CTC, which leaves Katey following in some big footsteps.

“Everyone has been so kind to me,” she said. “I have big shoes to fill after Wayne. Everyone loves him because he is so great.”

A career in theatre has been a lifelong dream for Katey. As a young child, she loved to sing along with her family as they played guitar at church and pageants. While in elementary school, her family moved from Knoxville to Crossville, Tennessee. After sharing that Katey was a “loud, creative child” with another mom at Katey’s school, the mom suggested that she take Katey to audition for a show at the local Cumberland County Playhouse. She was 9 years old when she got her first part in Oliver at the Playhouse and was hooked.

Katey continued to be involved at the Playhouse until she graduated from high school, performing in shows, taking acting classes, and working backstage or in the office. When she was 16, she began serving as an intern there.

In 2014, the Rhea Heritage Preservation Foundation in Dayton, Tennessee, commissioned the Playhouse to write a script for a musical dramatization of the 1925 Scopes Evolution Trial to be performed for Dayton’s annual summer Scopes Festival. As an intern, Katey was excited to take part in the project called Front Page News that summer and the following summer.

By the time she graduated high school, she said, “I could safely say I had worked in most facets of theatre, and I felt confident going to college to study for a career in theatre.” But she soon found there was still much she had to learn and explore.

Katey began attending classes at the University of Tennessee in Chattanooga in the fall of 2016. She said her mom persuaded her to try a degree in marketing, concerned about how sustainable a job in theatre might be. It only took her a week to realize that she hated the marketing classes and quickly changed her major.

She graduated from UTC in May with a major in theatre and a minor in public administration and nonprofit management. She is now working on a master’s degree at UTC in public administration with a focus in nonprofit management. While working on her undergraduate degree, she not only learned all aspects of theatre but also developed a passion for nonprofit work in arts management and seeing “the business side of things,” she said. She took several independent studies classes specific to arts management in addition to political science and local government management classes.

Katey first discovered the CTC in her freshman year, when she saw a performance of  Miracle on 34th Street and was very impressed. She said, “I thought ‘This little place is really special. I’m really glad we have this here.’” At the encouragement of one of her professors, she offered to work as an intern at the CTC beginning in the summer of 2019, helping wherever needed from stuffing fundraising envelopes to tabulating audience surveys.

The internship led to another internship opportunity at ArtsBuild, a local arts funding agency. Through this internship, she said, “I got to work with the Holmberg Arts Leadership program, sit in on workshops done by the Kennedy Center from Washington D.C., review grants, and met tons of people in the arts community in Chattanooga.”

She soon learned that there was a part-time position available in the CTC box office. She applied for the job and began working in December of 2019 under Wayne’s tutelage, in addition to part-time jobs as a barista at Starbucks and Mean Mug that she had held through her college years.

By mid-March, the coronavirus pandemic had struck the United States, causing shutdowns throughout the country, including the CTC, and much uncertainty. “We were furloughed for six weeks. My college graduation ceremony was cancelled. It was devastating to not get to walk across the stage for commencement,” lamented Katey. UTC later held an online commencement ceremony.

Now that the CTC has resumed classes, outdoor concerts, and reduced-capacity productions, the duties of Box Office Manager are somewhat different due to COVID restrictions and guidelines. “One of my newer duties is managing the social distancing in the theatre. We have a new seating chart and no longer print out physical tickets,” she said

Katey said, “I genuinely love my job and wake up every day happy with what I’m doing. I know that sounds cliché, but I do and it’s so nice. I love talking about theatre, being around it and being around like-minded people.”

She continued, “I truly just want every single person that wants to enjoy art and theatre to be able to do so. I believe theatre is powerful and life changing. It changed my life and I’ve witnessed it change others’ lives. So, anyone who wants to be a part of it, I want to help them do that.”

Katey admits that she has struggled with being discouraged with the current state of the world.

“It’s so easy to be negative with the pandemic and the political climate, but it’s those little things in life that make me happy and that I can control,” she said. “Looking at the little things has kept me grounded and sane. I’m so grateful to have this job. To have a job in my career field, I’m so thankful for the things over the last two years that led to it.”

Katey said she loves Chattanooga and its thriving arts scene and wants one day to be an executive director for a nonprofit organization.

“What I’m doing right now is what I’ve always wanted to do,” she concluded. “Working in theatre is exactly what I wanted. I’m glad I can tell people if you love theatre, it doesn’t have to be just a hobby. It can be a career.”