Chattanooga Theatre Centre Names 8 to Board of Directors 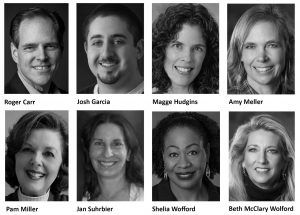 The Chattanooga Theatre Centre is expanding its Board of Directors with eight appointments it says will add expertise and diverse perspectives to the non-profit organization’s governing board.

“The Board of Directors is excited to welcome our new slate of directors,” said board president Mitch Collins. “The new directors have a wide range of backgrounds, including TV and film production, media, education, insurance, and community leadership. These are challenging times, and we need a diverse group with a large skill set to continue working towards our mission at the CTC. We’re pleased to have found that in this group.”

Cass is Chief Architect and Vice President of Unum Group and holds a Ph.D. in engineering. He previously served on the Board of Directors of Ronald McDonald House Charities in Dayton, Ohio. He and his wife, Jennifer, are the parents of eight children, all of whom are actively involved in community leadership and volunteer roles in theatre, improv, and chorale.

Garcia, an employee at Blue Cross Blue Shield of Tennessee, attended Harvard University, where he graduated with a B.A. in English. He stayed in Boston for several years after graduation and has returned to his hometown of Chattanooga. Garcia, who has appeared on the CTC stage, loves the arts and stays active as an actor, composer, and sound designer for community stage and film projects.

Hudgins has taught acting at the Center for Creative Arts for the last 13 years. She has a B.A. in English and theatre from the University of Tennessee and an M.F.A. in directing from Brooklyn College and is an alumnus of the Lincoln Center Director’s Lab. Hudgins has directed and performed in several CTC productions. She and her husband, Theron, are the parents of two children.

Miller is a founding member of the Performing Arts League. The first female counselor in a Tennessee all-male correctional facility, she worked as a juvenile probation/parole officer in North Carolina. She also served as Vice President of Corporate Ethics and Compliance with a multinational corporation. She and her husband, Frank, are dedicated CTC patrons.

Suhrbier has been serving the CTC as an administrative and front-of-house volunteer for the last five years. She is frequently joined by her son, Ben, who has attended Summer Academy, performed in several Youth Theatre productions, and served as part of the stage crew of several mainstage productions.

Wofford is a professional actress, writer, director, filmmaker, and casting director who has written and directed two award-winning films and has worked regionally on many productions. She has been performing for over 20 years, including volunteering with the Chattanooga Theatre Centre and Destiny Ensemble Theatre. She and her husband, Sam, have a son, Trey.

Wolford, sales director for The New Flat Rate, has worked for 30 years in sales in a variety of different roles. She has performed in theatre productions throughout the community and is well known for her musical theatre roles at the CTC. She is married to Jeff Wolford and has three grown children.

Founded in 1923, the Chattanooga Theatre Centre is one of the oldest and largest community theatres in the Southeast. The Theatre Centre produces high-caliber theatrical productions and provides volunteer and educational opportunities for people of all ages.