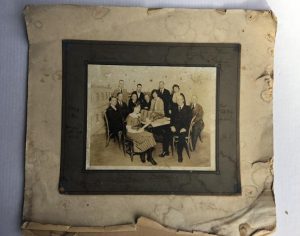 As the story goes, a young carpenter, James Bivens, found the vintage photo in a rubbish container during building renovation work at the theater in 1994, and years later — 2017 to be exact — he rediscovered the matted photo at his house and brought it to the theater.

Julie Van Valkenburg, the marketing director at the CTC, remembers the day Bivens arrived with the treasure, which pictures the local cast of “Dear Me,” a comedy that first played on Broadway in 1921. In that era, Little Theatre productions were staged at a former fire hall on Eighth Street.

“He (Bivens) is a bit of a hero to us,” Van Valkenburg said. “I remember the first staff meeting we had after the photo was discovered, everybody was enthralled and delighted. People ate it up.

“Obviously, we’re proud of our history, and to have a 96-year-old photo in our possession — one that captures the first people to bring great theater to our stage and to the community — is a thrill,” Van Valkenburg added.

She immediately placed the photo in a shadowbox and hung it in the lobby of the theater, which will celebrate the centennial of its charter in 2023. The 1924 photograph notes that “Dear Me” debuted here 96 years ago this week.

(Originally published in the Chattanooga Times Free Press at https://bit.ly/2ZbY79V)