Journey to Narnia in Youth Theatre’s “The Lion, the Witch & the Wardrobe” Feb. 21-March 1 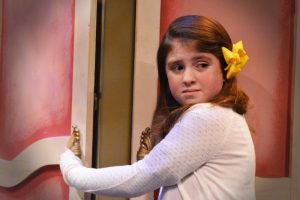 Step through the wardrobe this winter into the magical kingdom of Narnia in the Chattanooga Theatre Centre’s production of THE LION, THE WITCH & THE WARDROBE, opening February 21 and running through March 1.

The Youth Theatre will present a dramatization of C.S. Lewis’ beloved story of the same name, faithfully recreated for the stage by celebrated playwright Joseph Robinette.

Lewis’ story of four children who find their way through the back of an old wardrobe into the kingdom of Narnia, where a witch has cursed the land with eternal winter, represents one of the greatest battles between good and evil in children’s literature.

Like the classic book, the stage adaptation follows the magic and mystery of the great lion Aslan and his struggle with the White Witch as the children’s fate unfolds in enchanted Narnia. It’s a land full of mythical creatures, talking animals, quests, and secrets, and the action features chases, duels, and escapes as the witch is determined to end the reign of Aslan.

The CTC production will use masks, headdresses, and puppetry to animate the story, including an Aslan puppet with an 8-foot mane.

The production is directed by Chuck Tuttle, with Annie Collins serving as assistant director. Tate Mink and Isabella Rios are the stage managers.