CTC Embarks on Journey of Spiritual Awakening in “Gem of the Ocean” Jan. 24-Feb. 9 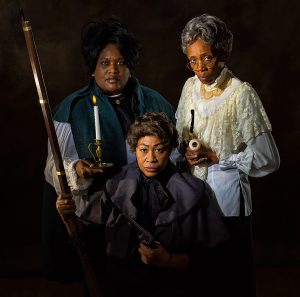 With a central character who claims to be 285 years old and a storyline that follows a journey to find a city in the center of the Atlantic Ocean, mysticism and realism intersect in the Chattanooga Theatre Centre’s upcoming production of August Wilson’s GEM OF THE OCEAN, opening Friday, January 24, and running through Sunday, February 9.

GEM OF THE OCEAN is chronologically the first work in the preeminent playwright’s celebrated 10-play American Century Cycle, each play capturing the essence of the African-American experience during a decade of the 20th century. Beginning with last season’s FENCES, the Theatre Centre has committed to producing the full cycle over the next 10 years.

Set in Pittsburgh in 1904, GEM OF THE OCEAN follows a myriad of characters among the first generation of African-Americans to emerge after the end of the Civil War and their history of enslavement. In the drama, waves of former slaves and descendants venture north and find themselves at Aunt Ester’s home in Pittsburgh’s Hill District. The fiery matriarch claims to be 285 years old and is known far and wide for cleansing souls and providing sanctuary to the troubled and lost.

Arriving on her doorstep is Citizen Barlow, a young drifter racked with guilt over his past crimes and desperate for redemption. Perhaps in his imagination or perhaps through mystical transportation, she sends him on a spiritual voyage across the Atlantic Ocean, following the route taken by the slave ships, to the City of Bones.

This mythical story is set against the very real backdrop of a turn-of-the-century Pittsburgh where tension boils and its population grows impatient with poor working and housing conditions.

GEM OF THE OCEAN is both a lyrical journey about spiritual awakening and a riveting tale of hardship, struggle, and freedom.

The play will be presented in the Circle Theatre with general admission seating. For tickets, call the CTC box office at 423.267.8534 or visit TheatreCentre.com.