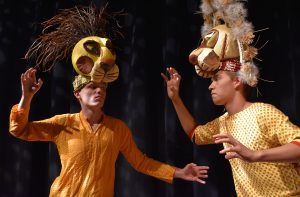 The original “The Lion King” has captivated the imagination of audiences around the world. In this junior adaptation, the African savannah comes to life on stage with a familiar cast of characters as they journey from Pride Rock to the jungle and back again.

It’s the story of the epic adventures of an adventurous and endearing cub named Simba as he struggles to accept the responsibilities of adulthood and his destiny as king of the Pridelands.

Along the way, the young lion encounters a colorful cast of characters, including spunky lioness Nala, charismatic meerkat Timon, and loveable warthog Pumbaa. To claim his rightful place on the throne and save his beloved Pridelands, Simba must find his inner strength and confront his wicked uncle Scar.

This abridged musical blends moments from the animated 1994 film and the Broadway production but in a shortened running time, making it accessible to young performers and young audiences. There are familiar songs like “Circle of Life,” “Hakuna Matata,” and the Academy Award-winning “Can You Feel the Love Tonight,” as well as additional songs penned for the Broadway production. The original music and lyrics are by Tim Rice and Elton John.

Charlie Clevenger portrays Simba, with Drew Champion as his kingly father Mufasa. Taylor Slack is his lioness friend Nala, and Noah Hawkins is his evil uncle Scar. Other familiar characters include Rafikia (MaKenzie Ballard), the wise mandrill who guides Simba on his journey, and Pumba (Darrius Calloway) and Timon (Eben Shriner), the comical warthog and meerkat who Simba encounters along the way.

The Chattanooga Theatre Centre production will use music, movement, fabric, headdresses, and puppets to animate the story. The production is directed by Scott Dunlap, with musical direction by Neshawn Calloway and choreography by Marie Dance. Angie Griffin is the assistant director, and Paul Knotts and Christiana Russell are the stage managers.